The text for the sermon comes from the epistle:

“So fight I, not as one that beateth the air: but I keep under my body, and bring it into subjection: lest that by any means, when I have preached to others, I myself should be a castaway.”

Today begins the so-called Gesimatide — Septuagesima, Sexagesima, and Quinquagesima. For the next three weeks, we prepare for Lent, which is in turn a preparatory season for Easter. Once again, as in the “Sunday Next Before Advent,” we are preparing to prepare!  The appointed collects and readings for these next three Sundays and for Ash Wednesday collectively offer a vision for Christ-centered self-denial and a healthy Lenten asceticism.

All of the epistle texts in Gesimatide are taken from St. Paul’s letters to the Corinthians. The church at Corinth was overflowing with spiritual gifts. In fact, these Corinthian folks were so “super-spiritual” that they did not think the body mattered at all. A dualistic denigration of the body often leads to severe and unhealthy forms of asceticism, but in Corinth the result was the opposite — if the body doesn’t matter, they supposed, then there’s no reason not to indulge every appetite!

In our text today, St. Paul affirms the value of bodily discipline. We must “run” like an athlete who “striveth for the mastery” and consequently “is temperate in all things.” St. Paul does “not run aimlessly” nor “box as one beating the air” (ESV) but with purpose and great intensity!

“I keep under my body, and bring it into subjection.”

This rendering rather softens the language. St. Paul literally says something closer to, “I pummel my body and make it a slave” (ESV note).

Three words of caution are in order. First, we must read St. Paul’s advice in light of the particular Corinthian indifference to bodily discipline and within the context of St. Paul’s larger theology of the body, which is robustly positive. Our body is God’s good creation, but, wounded by sin as it is, it must be disciplined. Second, note that the governing metaphor is athletic training. Good athletes neither hate nor harm their bodies — they care for their bodies with great attentiveness. The point, then, is not self-flagellation or masochistic practices but, rather, intense training in order to achieve peak performance.

Lastly, modern readers can easily misread this as individualistic. When St. Paul wrote our epistle text, he almost certainly had in mind the biennial Isthmian Games hosted by Corinth. These “were the second most popular events in Greece (after the Olympics)” — and it is likely that St. Paul would have been present in Corinth at least once during the games (Keener 81). The athletic events featured running, wrestling, and boxing but no team sports. Hence, the athletic imagery available to St. Paul could only derive from individual competition. Our text, however, is situated within a larger section of First Corinthians specifically describing a community bound together by love, and in the verses immediately preceding our text, St. Paul emphasizes his strenuous labor in spreading the Gospel: “I have become all things to all people, that by all means I might save some. I do it all for the sake of the gospel, that I may share with them in its blessings” (9:22b-23). Hence, we obviously cannot understand St. Paul to be encouraging some kind of cutthroat, winner-take-all spiritual competition. The point is the intensity of effort expended by athletes in pursuit of their goal which he calls “a corruptible crown.” Around that time the winners of competitions at the Isthmian Games received crowns made of wilted celery! So while they are exhausting themselves in pursuit of wilted celery, the Corinthians, who have before them an “incorruptible” crown of unspeakable glory, are putting forth hardly any effort at all!

God offers a stupendous reward for those who run. Just before our Gospel text, Jesus says that “everyone who has left houses or brothers or sisters or father or mother or children or lands, for my name’s sake, will receive a hundredfold and will inherit eternal life.” He says this as he reflects upon his encounter with the rich young man who lived a devout life, but, when it came down to it, preferred keeping his wealth to following Jesus. The verse immediately preceding our Gospel reading is Jesus’ final comment on the story: “But many who are first will be last, and the last first.”

Meanwhile, note how our text ends:

“So the last shall be first, and the first last.”

Today’s Gospel is one of those parables where, to be honest, I tend instinctively to oppose Jesus. It’s not so much that I rationally disagree with his point but that, in my gut, I object! Perhaps you never have those moments.

Imagine yourself in the shoes of a laborer who has been working in the vineyards since dawn. The householder — the owner of the vineyard — continues to hire more workers throughout the day, suggesting that it is the height of harvest in the heat of the summer. The work has been heavy and nonstop. You have “borne the burden and heat of the day.” When hired, you were promised a denarius, an average wage for a day’s labor. (Obviously, when the King James was authorized in England in 1611, “a penny” meant something different than it does today.) But at the end of this long and brutal day, as you wait for your wages — sweat-drenched, spent, exhausted — you realize with a start that the guys who showed up an hour ago (and by the way, there’s a pretty good chance that the reason those guys couldn’t get hired is because they’re unemployable riff-raff who everyone else passed over, so not only did you work ten times as long as they did, but they probably also weren’t nearly as productive as you!) — you realize that those guys are getting paid a full day’s wage for their little bit of work. And so you start getting excited — if they’re getting a full-day’s wage, what do you think you’ll get? at least twice that, right? — I mean, you probably did ten or twenty times as much work! But then the householder comes over and you get… one measly denarius.

I don’t know about you, but it doesn’t take much for me to imagine the resentment bubbling up. You might tell yourself it is righteous anger at the unjust way you’ve been treated — and it almost is that. Only it’s soured, curdled, turned in on itself. You aren’t upset about an injustice. Nothing has been taken away from you. If the householder had paid you first, you would have been perfectly satisfied with your day’s wage. No, what upsets you is the householder’s extravagant generosity with the undeserving! These early laborers strongly resemble the elder brother of the prodigal son, whose anger likewise stems not from being poorly treated but rather from resentment towards someone less deserving being treated so well. It is pure malice.

The warning for us, as we begin to prepare for Lent, is about ingratitude and entitlement. The early laborers managed to view the householder as indebted to them — as though, because of his generosity to the latecomers, he now owed them. The risk of fasting and spiritual disciplines is that we can easily imagine that by doing them, we put God in our debt. Of course, we must exercise discipline. As St. Paul tells us, we strive mightily for an “incorruptible crown.” But we must never fool ourselves into thinking that we are entitled to the crown. Even St. Paul the apostle — who, as we will see in next week’s epistle, did not suffer from insecurity or low self-esteem — even he did not consider his salvation something to be taken for granted, something owed to him. A late arrival himself — to whom Christ appeared “last of all, as to one untimely born” (1 Cor. 15:8) — St. Paul ran hard and fought with purpose, “lest that by any means, when I have preached to others, I myself should be a castaway.”

Everything we have — from the breath in our lungs to the food on our tables and the roofs over our heads, from our families to our friends to our very faith in God — all of these are gifts from a gracious God. Not one of them does he owe us. In Lent, we practice small acts of voluntary self-denial as training for larger acts which are sometimes forced upon us. Lenten self-denial encourages healthy detachment — which is not coldness or indifference but rather the recognition of your proper relation to other people and things. Ultimately they — both people and things — are gifts to be cherished, not property that is owned. The sacrifice required of us, our bounden duty and service, is simply to offer these gifts back to the gift giver.

When we come to see ourselves as the prodigal son and not the elder, as the latecomers and not the early arrivals, as last not first, as perpetually in need and extravagantly blessed, then we are insulated not only from poisonous ingratitude but also from complacency. Paradoxically, our salvation is a gift that we can never take for granted, and it is also a prize that we must strive to obtain.

“So fight I, not as one that beateth the air: but I keep under my body, and bring it into subjection: lest that by any means, when I have preached to others, I myself should be a castaway.” 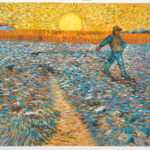 The text for the sermon is taken from the Gospel: “But that on the good ground are they, which in an honest and good heart, having heard the word, keep it, and bring forth fruit with patience.”  + It is a common misconception that Jesus spoke in parables because he wanted the people to understand […]