But now being made free from sin, and become servants to God, ye have your fruit unto holiness, and the end everlasting life. For the wages of sin is death; but the gift of God is eternal life through Jesus Christ our Lord. Romans 6:22-23

This conclusive statement is a result of what Paul had been saying through out Romans one way or the other:

by one man sin entered into the world, and death by sin… Romans 5:12

Remember what it means to be “in” someone. Recollect how Jonathan and David made a blood covenant with one another and how the blood covenant bound them not only to one another but also to their unborn children who were within their bodies. And don’t forget how David honored his promise to Jonathan by loving and saving Jonathan’s son Mephibosheth, a child who wasn’t even born when his father and David cut their covenant with one another. Another way of putting this would be to say that Mephibosheth “participated in” the covenant because he “participated in” his father Jonathan. He was in Jonathan’s loins — he was present as Jonathan’s unborn child.

Abraham believed God and “it was counted unto him for righteousness.” First thing to understand is that being counted righteous does not mean through faith in Christ all your law-breaking is forgiven, as one may be given amnesty through a court of law. The narrative here is not based on late medieval legal systems.  Nor does being counted righteous mean being a flawless law-keeper. When Abraham is said to have been counted righteous vis-a-vis his faith in God it means that Abraham, by trusting God, was in covenant with God. Being counted righteous means that Abraham believed God’s promise and that is how he was in covenant with God. The other thing to remember is that being reckoned righteous, being in the covenant was not just reckoned to Abraham as an individual person, it was reckoned to everyone who was “participating in” Abraham. Again, Abraham’s seed “participated in” the promise God made to Abraham because his unborn seed was “in’ Abraham. And now it is in light of that narrative history that we are to understand the first question of chapter 6:
“Shall we continue in sin, that grace may abound?”

I want you to keep this in mind as we revisit the problem of sin and death. At the end of Romans 5, Paul once again states that, “sin hath reigned unto death” which is to say that death constitutes a kingdom, a regime that has its own administrators, rulers and magistrates, who order and control life that under death. This wicked kingdom has come to occupy much of creation which is in fact God’s Kingdom. It will be a while before Paul identifies the administrators; these managers and supervisors of sin and death, but for now he wants us to thoroughly understand that the enemy has made a successful insurgency into God’s creation. The goal of the uprising has been especially to the separate the creature man from the God who is God.

The beginning of the rebellion is described in Genesis chapter 3, the old familiar story of the Garden of Eden: The serpent approached the woman and said, “Did God give you a specific commandment not to eat from every tree in this garden?” The woman said: “Yes he did. We can eat from every tree except that one over yonder; God said not to eat from that tree because if we do we will die.” The serpent said: “Ah. See, that’s not true. You will not die. He knows very well that if you eat the fruit of that tree it will open your eyes and you shall be gods yourself.” (Notice that the way this began with man was with a commandment from God that the serpent used to give birth to sin.)

Paul reviewed the wreckage that followed in human history in chapters 1, 2 and 3 of Romans. This is the human condition according to Paul; humanity, indeed creation itself, “participated in” Adam when he entered this insurrection against God and therefore we too are “in” sin, we too became insurgents against the Creator. Paul concludes that we too love and live among a people who foremost love and serve the creature rather than the Creator.

Up to this point, Paul and the Ruling Class of Israel would have been in agreement, but now he will separate himself and the Church from them on the matter of how to deal with Adam’s rebellion and the infection of sin and death. From the point-of-view of the Jerusalem Ruling Class, salvation is realized by being a law-abiding Jew. Gentiles could be saved if they became law-abiding Jews. Paul used to believe that himself.

But now Paul argues that it is foolish to “rest in the Law of Moses,” by which he means that it is foolish to think salvation is achieved by becoming a law-abiding Jew. Indeed the Kingdom of Sin and Death made its insurgency into God’s creation through Adam’s disobedience to a direct commandment from God. What makes you think that more laws will do the job?

Paul says that God has launched a counter-offensive against the Kingdom of Sin that will set the whole creation free: At the right time, God enlisted Abraham to fight back against the Kingdom of Death — and he did so, not by giving Abraham more commandments, but by making a Promise. God promised Abraham that He, God, would use Abraham’s family to redeem all of creation and to bring about such a beautiful, blissful blessing upon every creature and every man, woman and child in the world, that it would strain man’s imagination to even glimpse that future world that God was preparing. As the collect for last Sunday put it: “that we loving thee above all things, may obtain they promises, which exceed all that we can desire.” There are limits to desire. Abraham believed God and that established the Promise that Paul is constantly referring to in his epistles.

But Israel, certainly the Jerusalem Ruling Class took being a law-abiding Jew as God’s path of salvation — rather than bringing God’s blessing upon her it lead them further and further away from the Promise God had made to Abraham. That’s why Jesus told a prominent member of the Jerusalem Ruling Class, Nicodemus, that his birth as a Jew, even being a law-abiding Jew would not get him into God’s Kingdom. The man didn’t know what to say and so he said several stupid things. Jesus was talking foolishness as far as Nicodemus was concerned. If being a law-abiding Jew did not make you fit for the Kingdom of God nothing would. Jesus told Nicodemus that he and all the other teachers of Israel did not even understand their own religion.

And what Nicodemus and the teachers of Israel did not grasp, Jesus’s Apostles, including St. Paul after his conversion did grasp.

What Paul is saying is that we have been moved from one kingdom into another kingdom not by our own faith, but by the faith of Jesus Christ. We have been made citizens of a kingdom that was initiated by God through our founding patriarch, Abraham. Paul said that the “promise” made to Abraham, including the critical part Nicodemus overlooked, is that all the nations, not just Israel, would be blessed “in” Abraham; that is all nations, indeed the whole wide universe, will participate in Abraham’s blessing and thus benefit from Abraham’s faith and Jesus’ faith.

“Abraham believed God and it was counted unto him for righteousness,” but it was not just reckoned to him as an individual person, it was reckoned to everyone who was “in” Abraham. And to make his narrative of salvation even clearer, Paul points out that the promise God made to Abraham, he made before he was circumcised and therefore the promise applies to both Jew and Gentile.

This applies to all of us who are baptized into Jesus’ death and resurrection –- we too are reckoned to be children of Abraham and feed upon his faith. We are not “in” Adam nor are we participating in the Kingdom of Sin and Death. We have died to that kingdom because we have been baptized into Jesus Christ and made citizens of his Kingdom, members of his Body. We are the children of Abraham, we participate in his Seed, Jesus Christ who by his faith fulfilled the promise God made to Abraham. And like David who loved Mephibosheth as though he was Jonathan, so the Father loves us with the same love he has for Jesus. And all of the promises the Father made to Jesus apply to everyone who is in Jesus and just as the Father raised him from the dead, so that very promise belongs to us as well. Paul goes on then to draw out the implication of our new position in Christ and he makes it abundantly clear that this is not an antinomian position, that is that sin no longer matters. Nothing could be further from the truth:

Let not sin therefore reign in your moral body, that ye should obey it in the lust thereof. Neither yield ye your members as instruments of unrighteousness unto sin: but yield yourselves unto God, as those that are alive from the dead, and your members as instruments of righteousness unto God. For sin shall not have dominion over you: for ye are not under the law, but under grace. Romans 6:12-14

When Paul writes that, “you are not under the law, but under grace,” he is saying that we Gentiles are not under Moses, but we are under Abraham: we are branches that have been broken from wild olive trees and grafted into the Olive Tree of the Israel of God, which is Jesus Christ himself, which enables us to feed upon the richness of Abraham — and that mighty grace, our grafting is accomplished through holy baptism. This has nothing to do with making a transaction with God, it has everything to do with God, providing a shelter from the storm, a home for his children, a Temple we know as Holy Mother Church. And it means that Christians do not have to sin because we have died to sin and death. By our baptism we have been grafted mystically into life, death and resurrection of Jesus Christ. We have been buried with Christ in baptism we have died to the regime of sin and death and we have been raised to his moral life. For that reason Paul says:

yield yourselves unto God, as those that are alive from the dead, and your members as instruments of righteousness unto god. For sin shall not have dominion over you… 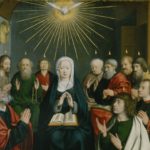