AND it came to pass the day after, that Jesus went into a city called Nain; and many of his disciples went with him, and much people. Now when he came nigh to the gate of the city, behold, there was a dead man carried out, the only son of his mother, and she was a widow: and much people of the city was with her. And when the Lord saw her, he had compassion on her, and said unto her, Weep not. And he came and touched the bier: and they that bare him stood still. And he said, Young man, I say unto thee, Arise. And he that was dead sat up, and began to speak. And he delivered him to his mother. And there came a fear on all: and they glorified God, saying, That a great prophet is risen up among us; and, That God hath visited his people. And this rumour of him went forth throughout all Judaea, and throughout all the region round about. Luke vii. 11 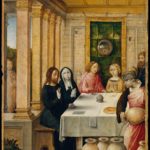 The text for the sermon is taken from the Gospel: “This beginning of miracles did Jesus in Cana of Galilee, and manifested forth his glory; and his disciples believed on him.” This Sunday’s Gospel reading comes from the Gospel of John who is the only Gospel writer to record the miracle at the wedding in […]