+ St. Bruno was born at Cologne about the year 1030. According to tradition, he belonged to the family of Hartenfaust, or Hardebüst, one of the principal families of the city. Little is known of his early years, except that he studied theology in the present-day French city of Reims before returning to Cologne where he was most likely ordained a priest around 1055, and provided with a canonry at St. Cunibert’s. Bruno of Cologne was the founder of the Carthusian Order, personally founded the order’s first two communities. He was a celebrated teacher at Reims, and a close advisor of his former pupil, Pope Urban II.

+ Bridget is the most celebrated saint of Sweden was the daughter of the knight Birger Persson of the family of Finsta, governor and Lawspeaker of Uppland, and one of the richest landowners of the country, and his wife, a member of the so-called Lawspeaker branch of the Folkunga family. Through her mother, Ingeborg, Birgitta was related to the Swedish kings of her era. She was born in June 1303. There is no exact recording for which precise date. In 1316, at the age of 14 she married Ulf Gudmarsson of the family of Ulvasa, Lord of Narke, to whom she bore eight children, four daughters and four sons. Six survived infancy, which was rare at that time. One daughter is now honored as St. Catherine of Sweden. Bridget became known for her works of charity, particularly toward Östergötland’s unwed mothers and their children. When she was in her early thirties, she was summoned to be lady-in-waiting to the new Queen of Sweden, Blanche of Namur. In 1341 she and her husband went on pilgrimage to Santiago de Compostela. In 1344, shortly after their return, Ulf died at the Cistercian Alvastra Abbey in Ostergotland. After this loss, Birgitta became a member of the Third Order of St. Francis and devoted herself wholly to a life of prayer and caring for the poor and the sick. It was about this time that she developed the idea of establishing the religious community which was to become the Order of the Most Holy Saviour, or the Brigittines, whose principal house at Badstena was later richly endowed by King Magnus IV of Sweden and his queen. In 1350, a Jubilee Year, Bridget braved a plague-stricken Europe to make a pilgrimage to Rome accompanied by her daughter, Catherine, and a small party of priests and disciples. This was done partly to obtain from the Pope the authorization of the new Order and partly in pursuance of her self-imposed mission Pope Urban V, during his brief attempt to re-establish the papacy in Rome, confirmed the Rule of the Order, but meanwhile Birgitta had made herself universally beloved in Rome by her kindness and good works. Save for occasional pilgrimages, including one to Jerusalem in 1373, she remained in Rome until her death on 23 July 1373, urging ecclesiastical reform.

+ On the Feast of Michael and all Angels, popularly called Michaelmas, we give thanks for the many ways in which God’s loving care watches over us, both directly and indirectly, and we are reminded that the richness and variety of God’s creation far exceeds our knowledge of it. The Holy Scriptures often speak of created intelligences other than humans who worship God in heaven and act as His messengers and agents on earth. We are not told much about them, and it is not clear how much of what we are told is poetic. Jesus speaks of angels as rejoicing over penitent sinners (Lk 15:10). Elsewhere, in a statement that has been variously understood, he warns against misleading a child, because their angels behold the face of God. The order of Angels has always been understood as very much involved with the Communion of Saints and especially associated with our prayers, which was acknowledged in the mass of the 1549 Book of Common Prayer:

“Yet, we beseech thee to accept this our bounden duty and service, and command these our prayers and supplications, by the Ministry of thy holy Angels, to be brought up into thy holy Tabernacle before the sight of thy divine majesty; not weighing our merits, but pardoning our offenses, through Jesus Christ our Lord; by whom, and with whom, in the unity of the Holy Ghost, all honor and glory be unto thee, O Father Almighty, world without end. Amen.”

+ Jerome was the foremost biblical scholar of the ancient Church. His translation of the Bible, along with his commentaries and homilies on the biblical books, have made him a major intellectual force in the Western Church. Jerome was born in about 347, and was converted and baptized during his student days in Rome. On a visit to Trier, he found himself attracted to the monastic life, which he tested in a brief but unhappy experience as a hermit in the deserts of Syria. At Antioch, he continued his studies in Hebrew and Greek. In 379, he went to Constantinople where he studied under Gregory of Nazianzen. From 382 to 384 he was secretary to Pope Damasus I, and spiritual director of many noble Roman ladies who were becoming interested in the monastic life. It was Damasus who set him the task of making a new translation of the Bible into Latin — into the popular form of the language, hence the name of the translation: the Vulgate. After the death of Damasus, Jerome returned to the East, and established a monastery at Bethlehem, where he lived and worked until his death on 30 September 420. Jerome is best known as the translator of the Bible into Latin. A previous version (now called the Old Latin) existed, but Jerome’s version far surpassed it in scholarship and in literary quality. Jerome was well versed in classical Latin (as well as Greek and Hebrew), but deliberately translated the Bible into the style of Latin that was actually spoken and written by the majority of persons in his own time. This kind of Latin is known as Vulgate Latin (meaning the Latin of the common people), and accordingly Jerome’s translation is called the Vulgate.

+ The Feast of the Exaltation of the Holy Cross — During the reign of Constantine, first Roman Emperor to profess the Christian faith, his mother Helena went to Israel and there undertook to find the places especially significant to Christians. She was helped in this by the fact that in their destructions around 135, the Romans had built pagan shrines over many of these sites. Having located, close together, what she believed to be the sites of the Crucifixion and of the Burial (at locations that modern archaeologists think may be correct), she then had built over them the Church of the Holy Sepulchre, which was dedicated on 14 September 335. It has become a day for recognizing the Cross in a festal atmosphere that would be inappropriate on Good Friday as a symbol of triumph, as a sign of Christ’s victory over death, and a reminder of His promise, “And when I am lifted up, I will draw all men unto me.” (John 12:32)

+ Hildegard of Bingen has been called by her admirers “one of the most important figures in the history of the Middle Ages,” and “the greatest woman of her time.” Her time was the 1100’s (she was born in 1098), the century of Eleanor of Aquitaine, of Peter Abelard and Bernard of Clairvaux, of the rise of the great universities and the building of Chartres cathedral. She was the daughter of a knight, and when she was eight years old she went to the Benedictine monastery at Mount St Disibode to be educated. The monastery was in the Celtic tradition, and housed both men and women (in separate quarters). When Hildegard was eighteen, she became a nun. Twenty years later, she was made the head of the female community at the monastery. Within the next four years, she had a series of visions, and devoted the ten years from 1140 to 1150 to writing them down, describing them (this included drawing pictures of what she had seen), and commenting on their interpretation and significance. During this period, Pope Eugenius III sent a commission to inquire into her work. The commission found her teaching orthodox and her insights authentic, and reported so to the Pope, who sent her a letter of approval. She wrote back urging the Pope to work harder for reform of the Church. 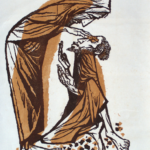