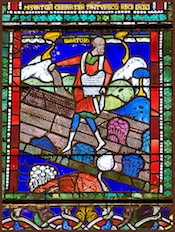 Communion Motet: “Ave verum corpus”
Text: Fourteenth-century eucharistic hymn
Music: Peter Philips (1583-1625)
Translation: “Hail the true body, born of the Virgin Mary: You who truly suffered and were sacrificed on the cross for the sake of man. From whose pierced side flowed water and blood: Be a foretaste for us in the trial of death. O sweet, O gentle, O Jesu, son of Mary, have mercy on me.”

Our anthem today is a setting by William Byrd of an ancient prayer that may date back to the sixth century and the time of Pope Gregory the Great. This prayer (with one verbal change) appears as a collect on page 49 in the 1928 edition of the Book of Common Prayer. In the 1662 BCP it is used as the final collect before the blessing in the service for the ordering of priests. It is in many editions of the English edition of the Prayerbook, included in the forms of prayer to be used at sea. It appears in the 1549 First Prayerbook of Edward VI, as the final collect in the Communion service, spoken just before the blessing. In the current Canadian version of the Book of Common Prayer, it appears as a collect in the “Office of Laying a Foundation Stone of a Church or Chapel.” In the Roman Catholic Church, the prayer is included in the lengthy Litany of the Saints, and some parishes use it every day during Lent. Here is the text of the prayer in its original form:

Prevent us, O Lord, in all our doings with thy most gracious favour, and further us with thy continual help; that in all our works, begun, continued, and ended in thee, we may glorify thy holy Name, and finally by thy mercy obtain everlasting life; through Jesus Christ our Lord. Amen.

Our present prayerbook changes that first word “Prevent” to “Direct,” which is appropriate if not quite as vivid. In the sixteenth-century, the word “prevent” meant to go before. In the King James Bible, for example, Psalm 88:13 reads: “But unto thee have I cried, O LORD; and in the morning shall my prayer prevent thee.”  In today’s anthem, the prayer is asking for God’s enabling and leading, not his obstructing.

The Gospel reading for this day is the parable of the sower from St. Luke chapter 8. The image above is a twelfth-century stained-glass window from Canterbury Cathedral.