It Takes a Parish and Lots of Time

As you all know we celebrated All Saints Anglican Church’s 30th anniversary with Bishop Grundorf and his wife Mary on the weekend of August 28 a few years back. Our parish got her start with the gathering of some very strong-willed folk who were members of the Prayer Book Society, an organization dedicated to the classical Book of Common Prayer. On that same weekend in August we opened up the newly remodeled Undercroft, a room that has already been filled with joy, study, celebration and fellowship, and I predict that will continue for years to come. I believe this warm, welcoming and friendly space will be a natural extension of our Common Prayer in the nave and sanctuary. Common Prayer folds us into Common Life in Christ.

Also, as most of you know, Ann and I were in Oxford, England, for Hannah’s graduation during the week before the dedication. Oxford University celebrated its 30th anniversary 770 years ago. Oxford was a full grown adult when the “Enlightenment” was the new kid on the block. Our Common Prayer and our Common Life in Christ owes much to Oxford and the Anglican Worthies who lived, worshipped and loved in those parish churches.

It is interesting how small things take on importance. Take wood for example. I am amazed at how resilient and lasting plain old wood is. There before me at St. Mary the Virgin church was the very pulpit (above) from which Keble preached his famous Assize sermon on national apostasy and the very pulpit from which John Henry Newman preached till he left for the Roman mission. Inside the chancel of St. Mary the Virgin were the choir stalls made of oak five inches thick, coated with centuries of wax and oil that nearly filled the carvings of initials, insignias, and who knows what. DJ + WF -what’s that all about? Love? Is that a cross? Both? Whatever that is about, the wood, strong as iron, was there under my elbows. This was the very chancel, with black and white marble tiles laid diagonally, the draped Altar pushed up against the Eastern Wall, in which Ridley, Latimer and Cranmer were tried, grilled, and finally condemned to die by fire about two blocks over on Broad Street. They were taken to a ditch, basically the city dump, and paid the price for their faith in Christ. 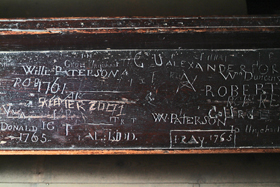 Stone I would expect to find and did. Iron, yes. But the wood surprised me. It might even surprise St. Paul who diminished the value of “wood, hay and stubble” because it ignites quickly. After Cranmer was martyred, the mayor of Oxford sent the Archbishop of Canterbury a bill that included the cost of Cranmer’s lodging, his food, his clothing, wine and the bundles of wood used to burn him to death. Wood may consume a Saint or make a Choir Stall. Wood is humble. It simply is there, opened up, uncovered, receptive. It may receive the carved initials of unknown lovers, memorializing them long after their once youthful and yearning bodies have turned to dust. Or wood may passively hold high the Son of God pierced with nails. Wood lasts longer than I would have guessed. It may form instruments of horror or instruments of blessing and by the grace of God sometimes both.

Well, there you have it. Our little Church of wood may last longer than we think. And remember the carved graffiti in the choir stalls. Don’t forget that people put their stamp on holy things in hope that by attaching their name to holiness they, too, may last longer than we think. Our parish has many stamps upon it. The Founders, strong-willed and most of them veterans of World War II, had a vision that involved saving precious things that were being jettisoned – thrown into the ditch and dump of modernity. But like any child, this parish eventually grew into something the parents never imagined. That’s what kids do. They keep you up at night, depriving you of needful sleep because they have dreams and visions that you never dreamed of yourself. Oxford celebrated her 30th anniversary 770 years ago. But as the wise woman will tell you, “It all started with that first year!”