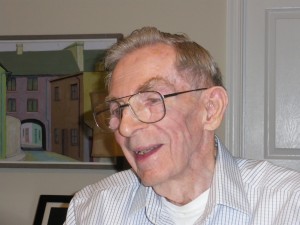 There are things you may know about Tom King: he is a career Merchant Marine, has spent hours sailing, and an avid reader — particularly Civil War history.

Here are some things you may not know about Tom. He was enrolled in the 1942 class of the US Merchant Marine Academy when the world changed with the bombing of Pearl Harbor. His training was trunucated and he faced the hazzards of war: transporting military cargo through contested waters, unarmed and without escort. During that time, Tom earned his Master’s License.

Tom became the Ship Master of the SNUG HITCH and transported cargo. Eventually his ship was designated a prison ship and on one occassion he transported 1,000 POWS to a camp in the Leyte Gulf. After the war ended, Tom’s ship carried a capacity load of former concentration camp victims from Germany to New York.

In 1949 Tom married and within a few weeks proceeded to his work at the US embassy in Seoul, Korea. When hositilities broke out in 1950, with N. Korean divisions invading across the 38th parallel, Tom and his wife abandoned their belongings and survived a harrowing escape.

One of Tom’s favorite experiences was serving as the Superintendent of the US Merchant Marine Academy. (He had by then achieved the rank of Rear Admiral.) He was the first USMMA graduate to serve as superintendent and remained there until 1987 when he retired from federal service. After retirement, Tom worked to establish a memorial to the 200 years of service rendered to America by merchant mariners. That effort resulted in a larger-than-life, bronze statuary dedicated in 1991 at New York City’s Battery Park.

Tom is proud of his two adult sons, Thomas, Jr., and Stephen and his four grandchildren. He is a regular at the 10:30 a.m. mass and appreciates the service at All Saints Anglican.

We will all miss seeing Tom, but it is a comfort to know that he will be praying for us before the Throne of Grace!