WHATSOEVER things were written aforetime were written for our learning, that we through patience and comfort of the scriptures might have hope. Now the God of patience and consolation grant you to be likeminded one toward another according to Christ Jesus: that ye may with one mind and one mouth glorify God, even the Father of our Lord Jesus Christ. Wherefore receive ye one another, as Christ also received us to the glory of God. Now I say that Jesus Christ was a minister of the circumcision for the truth of God, to confirm the promises made unto the fathers: and that the Gentiles might glorify God for his mercy; as it is written, For this cause I will confess to thee among the Gentiles, and sing unto thy name. And again he saith, Rejoice, ye Gentiles, with his people. And again, Praise the Lord, all ye Gentiles; and laud him, all ye people. And again, Esaias saith, There shall be a root of Jesse, and he that shall rise to reign over the Gentiles; in him shall the Gentiles trust. Now the God of hope fill you with all joy and peace in believing, that ye may abound in hope, through the power of the Holy Ghost. Romans xv. 4.

S. Matthew 21. 1-13
WHEN they drew nigh unto Jerusalem, and were come to Bethphage, unto the mount of Olives, then sent Jesus two disciples, saying unto them, Go into the village over against you, and straightway ye shall find an ass tied, and a colt with her: loose them, and bring them unto me.  And if any man say ought unto you, ye shall say, The Lord hath need of them; and straightway he will send them.  All this was done, that it might be fulfilled which was spoken by the Prophet, saying, Tell ye the daughter of Sion, Behold, thy King cometh unto thee, meek, and sitting upon an ass, and a colt the foal of an ass.  And the disciples went, and did as Jesus commanded them; and brought the ass, and the colt, and put on them their clothes, and they set him thereon.  And a very great multitude spread their garments in the way; others cut down branches from the trees, and strawed them in the way.  And the multitudes that went before, and that followed, cried, saying, Hosanna to the Son of David; Blessed is he that cometh in the Name of the Lord; Hosanna in the highest.  And when he was come into Jerusalem, all the city was moved, saying, Who is this?  And the multitude said, This is Jesus the Prophet of Nazareth of Galilee.  And Jesus went into the temple of God, and cast out all them that sold and bought in the temple; and overthrew the tables of the money-changers, and the seats of them that sold doves; and said unto them, It is written, My house shall be called the house of prayer; but ye have made it a den of thieves.

St. John 6. 5.
When Jesus then lifted up his eyes, and saw a great company come unto him, he saith unto Philip, Whence shall we buy bread, that these may eat?  (And this he said to prove him: for he himself knew what he would do.)  Philip answered him, Two hundred shillings’ worth of bread is not sufficient for them, that every one of them may take a little.  One of his disciples, Andrew, Simon Peter’s brother, saith unto him, there is a lad here, which hath five barley loaves, and two small fishes; but what are they among so many?  And Jesus said, Make the men sit down.  Now there was much grass in the place.  So the men sat down, in number about five thousand.  And Jesus took the loaves; and when he had given thanks, he distributed to the disciples, and the disciples to them that were set down; and likewise of the fishes as much as they would.  When they were filled, he said unto his disciples, Gather up the fragments that remain, that nothing be lost.  Therefore they gathered them together, and filled twelve baskets with the fragments of the five barley loaves, which remained over and above unto them that had eaten.  Then those men, when they had seen the miracle that Jesus did, said, This is of a truth that Prophet that should come into the world. 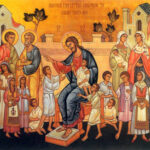 PETER said unto Jesus, Lord, how oft shall my brother sin against me, and I forgive him? till seven times? Jesus saith unto him, I say not unto thee, Until […]