AND it came to pass, as Jesus went to Jerusalem, that he passed through the midst of Samaria and Galilee.  And as he entered into a certain village, there met him ten men that were lepers, which stood afar off.  And they lifted up their voices, and said, Jesus, Master, have mercy on us.  And when he saw them, he said unto them, Go show yourselves unto the priests.  And it came to pass, that, as they went, they were cleansed.  And one of them, when he saw that he was healed, turned back, and with a loud voice glorified God, and fell down on his face at his feet, giving him thanks; and he was a Samaritan.  And Jesus answering said, Were there not ten cleansed? but where are the nine?  There are not found that returned to give glory to God, save this stranger.  And he said unto him, Arise, go thy way; thy faith hath made thee whole. S. Luke 17. 11

JESUS, departing from the coasts of Tyre and Sidon, came unto the sea of Galilee, through the midst of the coasts of Decapolis. And they bring unto him one that was deaf, and had an impediment in his speech; and they beseech him to put his hand upon him. And he took him aside from the multitude, and put his fingers into his ears, and he spit, and touched his tongue; and looking up to heaven, he sighed, and saith unto him, Ephphatha, that is, Be opened. And straightway his ears were opened, and the string of his tongue was loosed, and he spake plain. And he charged them that they should tell no man: but the more he charged them, so much the more a great deal they published it; and were beyond measure astonished, saying, He hath done all things well: he maketh both the deaf to hear, and the dumb to speak. St. Mark vii. 31. 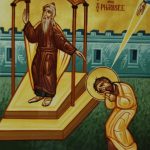 JESUS spake this parable unto certain which trusted in themselves that they were righteous, and despised others:  Two men went up into the temple to pray; the one a Pharisee, […]