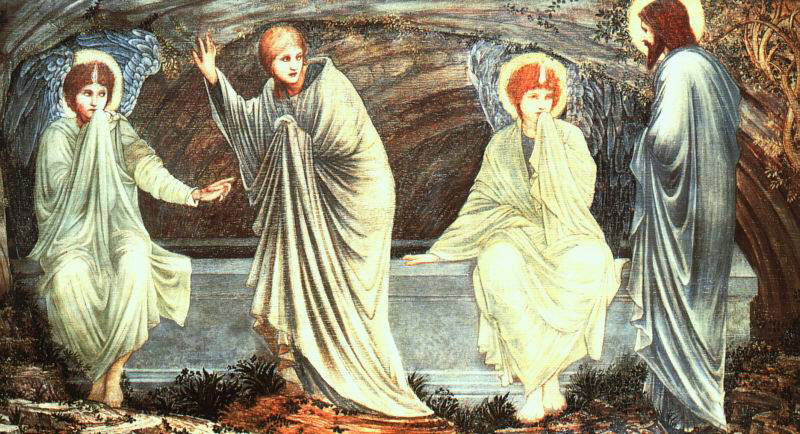 “But Mary stood without at the sepulcher weeping: and as she wept, she stooped down, and looked into the sepulcher, and seeth two angels in white sitting, the one at the head, and the other at the feet, where the body of Jesus had lain. And they say unto her, Woman, why weepest thou? She saith unto them, Because they have taken away my Lord, and I know not where they have laid him. And when she had thus said, she turned herself back, and saw Jesus standing, and knew not that it was Jesus. Jesus saith unto her, Woman, why weepest thou? Whom seekest thou? She, supposing him to be the gardener, saith unto him, Sir, if thou have borne him hence, tell me where thou hast laid him, and I will take him away. Jesus saith unto her, Mary. She turned herself, and saith unto him, Rabbo’ni; which is to say, Master.”

According to John, Mary Magdalene was the first one at the tomb, but we know she was not alone because she told Peter “we know not where they have laid him.” From the other Gospels we also know that Mary the mother of James, Salome and Joanna, were among the women who had come to the tomb in the early morning. Joanna was the wife of Herod’s steward. A steward in antiquity had authority to procure, to plan, to organize and manage households. Joanna had personal wealth at her disposal. These same women are named in Luke Chapter 8 among Jesus’ earliest followers. In fact, Luke informs us that these women, at their personal expense, provided for the daily needs of Jesus and his disciples.

Nicodemus and Joseph of Arimathaea removed the body of Christ from the Cross and quickly wrapped it in a linen shroud and laid him in a rock-hewn tomb close to where he was crucified. Mary Magdalene and other women followed them and saw the tomb.

But Mary Magdalene looms large in all the Gospels. Why? Mary is not reckoned to have been great in faith, nor great in understanding. But according to Jesus she had much love. Where she was once known for her sins, she is now known for her love.

The first experience of the resurrection is told from Mary’s point-of-view. Remember her distress upon finding the stone rolled away. She ran straight to Peter. “They have taken him away and we do not know what they have done to him!” Peter and John then ran to the sepulcher and confirmed Mary’s report.

They went into the tomb. Jesus was not there. The linens were there, but the body of Jesus was missing. Peter and John quickly returned to their safe house, but Mary Magdalene would not leave. She was determined to find out where Jesus’ body had been taken. Eventually she went into the tomb and saw:

“Two angels in white sitting, the one at the head, and the other at the feet, where the body of Jesus had lain.”

There is much to love in John’s Gospel. For one thing it includes accounts of our Lord’s life that are left out of the other Gospels. But there is also his hymnody and poetics and the high theology of human flesh, the material world and of women.

I especially love John’s use of imagery. By appealing to our visual imaginations, John paints stories that communicate profound theology. These images were meant communicate to a specific audience – John’s intended reader. John’s intended reader or assumed reader would have understood these word pictures because they were already a highly significant part of his life. Here is one important example I have pointed out before:

“two angels in white sitting, the one at the head, and the other at the feet, where the body of Jesus had lain.”

You see that picture? There’s the stone slab where the body of Jesus had lain, there the bloodied cloths not scattered about, but just lying there; and at either end is an Angel. See that picture in your mind’s eye. It’s easy. Now if you were a Jewish follower of Jesus in John’s day, you would have been John’s assumed reader and sooner or later something else would occur to you about those Angles and that slab of stone. Pass over to the point-of-view of a Jewish Christian in John’s day. At some point, just because you were a Jewish Christian it would dawn on you that you had seen that before! And eventually you would remember where you had seen it. You would recall God instructions to Moses for the Ark of the Covenant and the Mercy Seat.

Now what does this mean? The Mercy Seat was kept in the Holy of Holies in the Temple and it was approached only on the Day of Atonement. On that day, a Jewish High Priest would enter the Holy of Holies and sprinkle the blood of a bull upon the Mercy Seat as atonement for all of Israel. Incense was burnt first so that a cloud rose up over the Mercy Seat. Can you see that? If you were a Jewish Christian you would see with your mind’s eye and you would understand that the Tomb of Jesus is the true Holy of Holies and the Stone upon which his lifeless body was placed is the true Mercy Seat with real angels, not man-made angels, on both ends. When John wrote to Jews who had become Christians he was showing them how Jesus has completed the Old Testament revelation. And this Atonement, offered one time by Jesus is “a full, perfect, and sufficient sacrifice and oblation” and it will never have to be offered up again. Ritual sacrifice has come to an end. It is finished.

And not only that, but this Mercy Seat of the Tomb also gives way to another Mercy Seat. There is no Sanctum Sanctorum hidden deep in some temple in Israel! Our Temple is the resurrected body and life of Jesus Christ. So if you need mercy and if you want to know God and participate in his life, you don’t have to go to Jerusalem to do it.

By the grace and specific institution of Christ we have another Mercy Seat, in fact the final Mercy Seat, where you may enjoy Holy Communion with God and it is right there in front of you at that Altar. And every one of John’s first century Jewish Christians would have seen just that. We celebrate the Day of Atonement every time we celebrate the Eucharist.

And there I will meet with thee, and I will commune with thee from above the mercy seat…”

The Gospel and the Epistle candles ought to remind you of the Angels upon the Mercy Seat. And nothing may be placed higher than the Cross! That instrument of horror was made our means of Atonement! Jesus has transformed it into an instrument of Love.

The fair linens upon the Altar have five embroidered crosses, one in each corner and one in the middle with a crown of thorns. The fair linens should remind you of the linen clothes found by Peter and John upon the stone where our Lord once lay. Here is the Holy of Holies. Here is the final Mercy Seat.

Let’s get back to Mary Magdalene. Imagine what she went through. I am sure she had not slept and her last meal was probably with Jesus – four days ago. That’s what happens to bereaved people. Her affect is just flat. She is forever weeping. She saw terrible things fall upon the man she loved.

I don’t know how long Peter and John were gone, but eventually she stooped down and looked into the sepulcher. What she saw should have taken her breath away. And had she not been worn out from grief and fatigue it would have. There, upon the spot where Jesus’ body should be were the two angles:

“Why are you weeping?”

Mary answered them mechanically like anyone grief stricken and exhausted: “They have taken away my Lord and I do not know where they have laid him.”

Then she turned around and Jesus was standing right there. But she did not recognize him. How could she? He was battered bloody the last time she saw him. He was mutilated – a gory lifeless mess. No, she was not expecting a resurrection. She thought this was the gardener.

Remember how in the Gospel of John people are always making mistakes and misunderstanding Jesus? Anytime someone makes a mistake of identity in a Gospel it means something. What would this have meant to a Jewish Christian in John’s day? Well who was the First Gardener? Every little Jewish child knows that Adam was the first gardener. By identifying Jesus as a gardener, Mary is identifying him with Adam. Here is the Last Adam and he is in a garden that is bursting with life. And Jesus has a wound in his side just like the first Adam. As the Mother of Humanity was taken from Adam’s side, so Holy Mother Church was taken from the side of the Last Adam when a Roman soldier opened up his side and water and blood poured forth. From the water of Baptism Holy Mother Church is born and she is nurtured on the blood of Christ.

But it is getting late and we need to get back to Mary!

Mary said: “Please sir, if you have taken him somewhere else tell me where that I might take him away.”

And then Jesus said one word to her: “Mary.” And instantly she recognized his voice. Without any categories to understand what was happening, she simply gave herself to his love. No one in the world could say “Mary” like Jesus said “Mary.” No one had ever loved her like Jesus. No one had ever taken the mess she and others had made of her life and turned it into such beauty. She knew what it was to be used. And she knew what real love was all about because Jesus had come into her life. Frankly, I seriously doubt that anyone could out love this woman, but Jesus himself. She knew straight away, without one single doubt, that it was Jesus because of the way he said “Mary.” After all, isn’t that exactly what Jesus had taught her and the others: “My sheep hear my voice, and I know them and they follow me.”

Listen today. Listen. Not to me. But listen for the voice of Jesus. As you knell at the Altar, as you receive his life in the palm of your hand, or upon your tongue, offer up your life to the Lover of your soul. 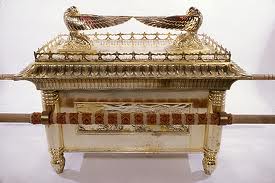