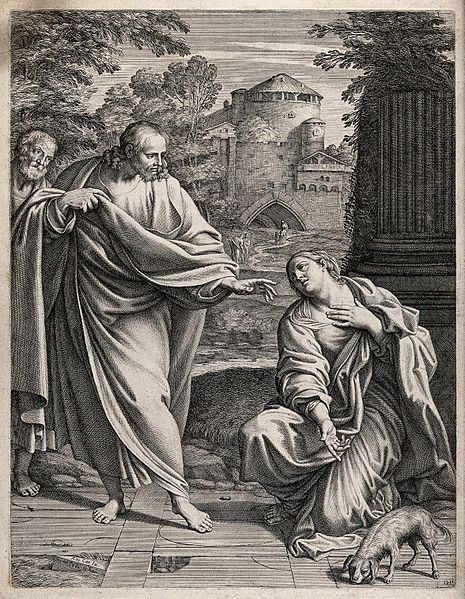 The text for the sermon comes from the epistle:

“We beseech you, brethren, and exhort you by the Lord Jesus, that as ye have received of us how ye ought to walk and to please God, so ye would abound more and more…. For this is the will of God, even your sanctification.”

Our lectionary today gives us two meditations on perseverance, one an exhortation to pursue sanctity without ceasing and the other an example of that persistence in action. This seems just right for Lent II, when the initial enthusiasm for our Lenten resolutions may have started to wane. Taken together, our two texts affirm that, regardless of what our current stage of holiness happens to be, we all urgently need to pursue Jesus. In our epistle text, St. Paul beseeches and exhorts an already-faithful parish not to give in to complacency but rather to “abound more and more” in holiness. By contrast, the gospel places before us the example of a pagan woman’s unflagging pursuit of Jesus in spite of his apparent indifference. Perseverance, in other words, is the antidote to both complacency and despair.

Let’s turn to the epistle. Given the urgency with which St. Paul writes, you might think that the church at Thessalonica was in a bad state. Not so! This is not a church on the edge of apostasy, as in the letter to the Galatians, nor is it a church that, as best we can tell, struggles with rampant sexual sin like the church at Corinth. To the contrary, the first two chapters of 1 Thessalonians are filled with unqualified praise for their faithfulness. As the great Anglo-Catholic divine John Keble writes, St. Paul “seems hardly to know how to say enough of their faith and charity, or of the noble and self-denying way in which they had received the Gospel.” We can see evidence of this in the passage before us. St. Paul’s exhortation is not a call to reverse course or change direction but rather to “abound more and more.” The message is not “repent and turn” but, rather, “keep it up!”

If they are on the right path, why does St. Paul write so urgently? Both our epistle and gospel readings suggest that your current spiritual state — where you are now — in some ways matters less than where you are headed. Are you abounding more and more? Or are you stagnating in a false sense of self-satisfaction? As Keble says, “one indispensable mark of true repentance is a daily, unwearied endeavour to improve.”

If you grew up in Protestant churches, as I did, you might even now feel the spectre of “works-righteousness” haunting your reading of this text. St. Paul is not, of course, inviting the Thessalonians to try to earn their salvation. When St. Paul says elsewhere to “work out your own salvation with fear and trembling” (Phil. 2:12), he is not inviting you to spend your days trying to figure out if you are, in fact, saved, nor to expend a lot of effort trying to get saved. Rather, it means to live out your salvation! Live out the reality of your regeneration — which was never something you did, dead as you were in your transgressions, but which was done to you at your baptism. There is no better time than Lent to work out our salvation with fear and trembling — to renounce complacency, to renounce any sense of having done enough to be a good person, thank you very much. Let us learn, instead, to abound more and more.

“For this is the will of God, even your sanctification.”

Our gospel text also urges persistence. Three different characters populate the story: Jesus, the Canaanite woman, and the disciples. These disciples, like the Thessalonians to whom St. Paul writes, are also following Jesus, but the four gospels each provide a number of examples of their pride, complacency, and self-satisfaction.

Jesus’ disciples do not generally suffer from an excess of empathy for the weak and downtrodden. In Matthew 20, they are part of a crowd shooing away blind men crying out for mercy. In chapter 19, they sternly admonish those who had the nerve to bring children to Jesus. And in chapter 14 — shortly before our story — they ask Jesus to send the hungry crowds away to go “buy food for themselves” (v. 15). Likewise, the foreign woman crying out for mercy for her demon-possessed daughter in our text appears to provoke not compassion but irritation:

“Send her away; for she crieth after us.”

The Gospel of Mark identifies her as Syrophoenician — Greek. But in Matthew she is anachronistically described as “a woman of Canaan.” This is really quite strange because, by the time of Jesus, Canaan had not existed for centuries. Calling her a Caananite would be like referring to Germans as Visigoths — it’s odd! This peculiar identification is deliberate and telling. As the original Jewish audience of St. Matthew’s Gospel would have immediately recognized, Canaanites were the distinctly unchosen peoples whom the Hebrews, God’s elect, had displaced in the Promised Land. The anachronistic label, then, serves to highlight her status as an outsider to — or even an enemy of — God’s covenant.

This passage also challenges us to make sense of its disturbing portrayal of Jesus — after all, we do not expect our Lord to call someone a dog! There are various attempts to soften this ethnic slur — pointing out that it was common Jewish practice to refer to Gentiles as dogs, that Jesus uses the diminutive form of dogs (little dogs, puppies), or that the context implies household pets rather than strays. To be honest, these don’t do much for me. If I’m the Canaanite woman, I’m not deriving a lot comfort from being a housebroken dog!

What, then, are we to make of Jesus in this story? I believe Jesus is enacting a real-life parable. Parables always illustrate something surprising about the kingdom of heaven. Often, parables seem at first to reinforce the hearers’ understanding of the world but then unexpectedly upend those very presuppositions.

Likewise, in our story Jesus initially reinforces his disciples’ sense of superiority. After all, it is his complete silence in the face of the woman’s cries that encourages them to ask Jesus to send her away. The disciples’ reaction to his comment about children and dogs is not recorded, but given their general lack of empathy and widespread Jewish attitudes towards Gentiles at the time, I imagine them nodding along in self-satisfaction.

But then, suddenly and dramatically, Jesus reverses course, crying out,

“O woman, great is thy faith: be it unto thee even as thou wilt.”

This Canaanite woman is one of only two people whom Jesus specifically highlights for the greatness of their faith. The other, from Matthew 8, was a Roman centurion: “Verily I say unto you, I have not found so great faith, no, not in Israel.” Recall too that, in the story of St. Peter walking on water a chapter before our text, Jesus gave him the undesirable nickname, “O thou of little faith.” No doubt this statement was ringing in Peter’s ears as he heard Jesus uphold the great faith of this woman, this Canaanite dog.

Speaking of which, I suspect I am not the only one who has felt the urge to correct Jesus when it comes to his evaluation of St. Peter’s faith. The man stepped out of a boat in stormy seas to walk on water! What could possibly be so little about such faith?

It did not last. St. Peter did not persist. We need, that is, not only faith powerful enough to step into stormy seas and walk towards Christ, but also resilient enough to persevere when Christ’s back seems turned to us. Let this Lent, then, be a time in which you practice perseverance in prayer, in fasting, and in alms-giving. A successful Lenten fast may not be one in which we never fail. But a Lenten resolution is ultimately only a failure when we give up, throw in the towel, and admit defeat. Instead, let us recommit ourselves, as often as necessary, to the purposes for which we fast in the first place: to grow further from sin and closer to Jesus. Great faith is persistent faith.

The Canaanite woman could not, of course, have known she was part of a real-life parable. All she would have experienced in the moment was rejection and alienation. It’s helpful to imagine the scene from her perspective: she is alone amidst a crowd of foreign men. The text says she “came out” of the coasts of Tyre and Sidon, suggesting that she has journeyed to find Jesus, so she is probably dusty and bedraggled from travel. She is a Gentile crying out for aid from a man she identifies in explicitly Jewish terms:

Our cultural distance from her blinds us to the strange and inappropriate nature of her conduct. She is alone, and she is shouting at a man. The text hints at this:

That is, “Look! Look at this strange sight!” No wonder the disciples find her a bit pathetic. Yet her vulnerability does not stop her for a moment, driven as she is by love for her daughter and drawn by faith to Jesus. She is clearly a desperate woman. And what seems to be the fruit of her courage? Jesus first ignores her, then denies her right to healing, and then implicitly calls her a Gentile dog!

None of this deters her. We do not know how or precisely what the Canaanite woman knows of Jesus beyond the messianic title she gives him, but we do know that she worships at his feet. One preacher comments, “Nothing more is required of a sinner, than that he should know himself to be such, and act accordingly” (I. Williams). She knew herself to be outside of God’s covenant — just as we all were once “dead in trespasses” (Col. 2:13) — and she knew that her only hope lay in Jesus.

If we find ourselves confronted by an apparently silent Savior, are we willing to be pathetic and desperate? Are we willing to humble ourselves in pursuit of Jesus — just as Jesus “humbled himself, and became obedient unto death, even the death of the cross” (Ph. 2:7-8)? The Canaanite woman’s blend of humility, need, and perseverance is something for each of us to emulate this Lent. Her persistence echoes the demand of Jacob when he wrestles with God: “I will not let thee go, except thou bless me” (Gen. 32:36). Like her and like Jacob, we must cling to the promises of God — even in periods of aridity, when we seem to be wrestling rather than communing with God, when our experience of him seems marked more by indifference than welcome, when our prayers seem answered by nothing but silence.

Perhaps today you identify more with the Thessalonians, knowing God’s favor and tasting his goodness. You may not be in danger of despair, but you are surely in danger of complacency and self-satisfaction. May this Lent be a season in which you renew an unstinting pursuit of Christ with the same determination as the Canaanite woman. Wherever you find yourself today, these two Lenten texts urge you to persevere. When we persist in seeking God’s mercy and in pursuing his holiness, we will receive his grace.

“We beseech you, brethren, and exhort you by the Lord Jesus, that as ye have received of us how ye ought to walk and to please God, so ye would abound more and more…. For this is the will of God, even your sanctification.”