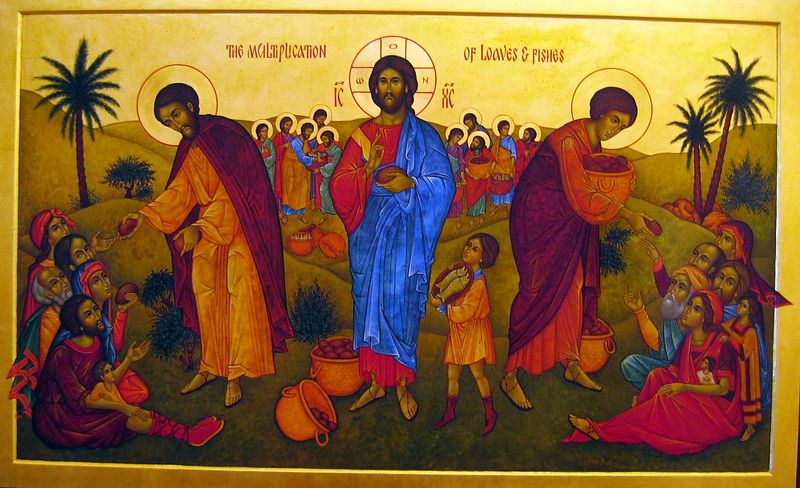 Lent is the Spring season of the church, and as such, it is the season of preparation. In spring, in order to prepare our gardens, we dig and till. Spring is the season of baring the soil, piling the rich compost on the wintered ground. Heavy lifting, seed sowing, raking and trimming, pruning and planting. There is a time for everything, but now is the time to prepare. Likewise, Lent is the time to prepare our souls. We pray and fast. We give alms and await holy week. Specifically we repent and confess, rending our hearts so that, as the collect says, “We may obtain of thee, the God of all mercy, perfect remission and forgiveness; through Jesus Christ our Lord.” Remission of sins, however, is not the only end for which we prepare. This week the Gospel illumines the end and to this we turn our attention:

And Jesus took the loaves, and when he had given thanks, he distributed to the disciples, and the disciples to them that were set down; and likewise of the fishes as much as they would.

The feeding of the 5000 is the only miracle of Jesus in all four Gospels, but in John’s gospel it plays a special role as a turning point in Jesus’ ministry. In our house, we have several children’s Bibles which all portray a serene Jesus surrounded by a smiley crowd, but the truth of the event is much more tense. The Jewish leaders of Jerusalem have just set themselves against Jesus. John writes:

“Therefore the Jews sought the more to kill him, because he not only had broken the sabbath, but said also that God was his Father, making himself equal with God.” John 5:18

Their threats do not exactly silence Jesus–in fact, the end of John 5 is Jesus’ response to their accusations and threats. Jesus says:

“But I know you, that ye have not the love of God in you. I am come in my Father’s name, and ye receive me not: if another shall come in his own name, him ye will receive.[…] For had ye believed Moses, ye would have believed me: for he wrote of me. But if ye believe not his writings, how shall ye believe my words?” John 5:42-43, 46-47

“The Lord thy God will raise up unto thee a Prophet from the midst of thee, of thy brethren, like unto me; unto him ye shall hearken.” Deut 18:15

This is John’s backdrop to the feeding of the 5000. Its a bit different from the idyylic picnic lunch setting from a childrens Bible, isnt it?As Jesus has just claimed that Moses prophesied his coming, John records that the people follow Jesus as he crosses the sea, enters the wilderness and goes up on a mountain. What does that remind you of?! Then the people come around the mountain, and Jesus feeds them bread in the wilderness. At first, the Apostles are alone with Jesus, and when they see the people coming from afar off, Jesus tests Philip. Philip expresses astonishment at the idea of feeding so many men. Andrew, however, seems to catch on over time and helps Philip. He finds a a boy who offers up some simple gifts, and after Jesus organizes the people, as God did with the tribes of Israel in the wilderness, Jesus miraculously turns the five loaves of bread and two fish into a feast for all.

After the miracle, the people attempt to appoint Jesus their military and politcal leader. Jesus will have nothing with it. As Augustine of Hippo puts it: “Jesus who shrank from being made a king, was a king [already]; he was not made king by the people but was the one who would bestow a kingdom on people” (Augustine, Tractates on John). Further on in chapter 6, Jesus himself unpacks the true meaning of his miracle, causing most of his followers to leave. Those who wanted to crown him now abandon him. Jesus said:

“Verily, verily, I say unto you, Ye seek me, not because ye saw the miracles, but because ye did eat of the loaves, and were filled. Labour not for the meat which perisheth, but for that meat which endureth unto everlasting life, which the Son of man shall give unto you: for him hath God the Father sealed. … Then Jesus said unto them, Verily, verily, I say unto you, Moses gave you not that bread from heaven; but my Father giveth you the true bread from heaven. For the bread of God is he which cometh down from heaven, and giveth life unto the world. … I am the living bread which came down from heaven: if any man eat of this bread, he shall live for ever: and the bread that I will give is my flesh, which I will give for the life of the world. – Jhn 6:26-27, 32-33, 51 KJV

With this teaching, it becomes clear that Jesus is making the most radical claim.To some, it seems insane, to others absurd. In the context of John’s Gospel, the feeding of the 5000 does not put Jesus on par with Moses, but with God the Father. Jesus says as much! Therefore, given the background of chapter 5 where the Jews set out to kill Jesus because of his statements regarding God the father, now Jesus’ actions only confirm the fact straight to their faces. Moses was present each morning as God gave manna to His people, but Jesus feeds the people Himself. Moses spoke to God, face to face, but Jesus continually abides in the Father’s presence. Given the context of John’s Gospel, this matters, because first, it is another bold claim of Jesus’ divinity. But our knowledge of Jesus also gives us a new knowledge of ourselves. John claims that Jesus is more than just a new Moses, and the conclusion from that means that it is the Christian who is the new Moses. You are the new Moses. All believers share in Jesus’ relation with His Father which means that we now may speak with the Father just as Moses did.

Remember what John writes in his prologue:

“And the Word was made flesh, and dwelt among us, (and we beheld his glory, the glory as of the only begotten of the Father,) full of grace and truth.” John 1:14

Just like Moses, we now behold the glory of the Father, but now through our relation with Jesus. The Apostle Paul states this clearly in his second letter to the Corinthians:

“Seeing then that we have such hope, we use great plainness of speech: And not as Moses, [which] put a vail over his face, that the children of Israel could not stedfastly look to the end of that which is abolished: But we all, with open face beholding as in a glass the glory of the Lord, are changed into the same image from glory to glory, [even] as by the Spirit of the Lord.” – 2Co 3:12-13, 18 KJV

This is what we are preparing for, this is our end. John warns, though, that many miss this end. Taking a lesson from the Gospel, during our preparations, we must be careful not to impose our own expectations and desires upon Jesus like the Jewish leadership or the fanatic crowds. The Jewish leadership, interestingly, understands the words and actions of Jesus better than anyone else. They quickly realize that Jesus is not claiming to be just another prophet, but that he is claiming to be God. However, their hearts are so hardened and unopened to the love of God that they seek to kill their own Messiah.

On the other hand, the fanatic crowd who came to Jesus that day, the same that ate of the bread, also misunderstand the man standing before them. The people in Jesus’ time are just as fickle as Israel was after the Exodus. John explicitly states that they followed Jesus as a result of his signs and miracles. Because of their type of faith, one that relies upon their own expectations, they try to claim Jesus as their king for their own political freedom.

The truth of the matter is, however, that in order to be shaped into His image, our expectations and desires must be ordered by our love for Him. More precisely, our desires become Jesus’ desire, which is a perfect love of God the Father. We grow as we learn how to live like Jesus. As the Psalmist says:

“For with thee is the fountain of life: in thy light shall we see light.” Psalm 36:9

Of course, this is a long process and during our annual observance of Lent we continue to prepare our hearts for this. The Gospel offers a helpful lesson on how to do this. First, the wonderful miracle of the feeding of the 5000 happened as a result of a simple offering. The little boy whom Andrew had found offered a small meal. But through that offering, Jesus performs a wonderful miracle and we, as a result, have learned more about the person of Christ. Likewise, if you are at a loss how to prepare your heart, begin with what you already have. Offer to Jesus your desires, troubles, anxieties, talents, and expectations, and he will transform those over time into a beautiful offering to God.

Second, we must not be surprised by testing. John records that Jesus tests Philip with his questions about how to feed such a large crowd. I do not think Philip failed the test, but it was Andrew who showed complete trust—he knew who Jesus was, and trusted that the offering he had found could feed such a crowd. We should not be shocked, then, by such tests. This could mean not receiving the answer you expected from your prayers, or receiving silence to your prayers. In the Gospel, there is a gap of time between Jesus’ questions to Philip and his actions in response to Andrew. The silence of Jesus, however, was not a sign of inaction, but one of planning and testing. Once again, this period of testing requires an openness in ourselves to change our own desires and expectations to match those of Christ.

Third, we must abide in the presence of Christ. It would benefit anyone to meditate on Jesus’ words in John 6, and perhaps that is something you can do in the final two weeks of Lent. The glory of the Father is Jesus, and it is His presence that we enter every time we come to Mass. Therefore, we repent our sins so that we might spend time with Jesus with a heart ready to receive him, open to him to shape our desires. In the end, may our desires be pointed towards Jesus and changed from glory to glory.

And Jesus took the loaves, and when he had given thanks, he distributed to the disciples, and the disciples to them that were set down; and likewise of the fishes as much as they would.