I behold a new and wondrous mystery! My ears resound to the Shepherd’s song, piping no soft melody, but chanting full forth a heavenly hymn.

The Angels sing! The Archangels blend their voices in harmony! The Cherubim hymn their joyful praise! The Seraphim exalt His glory!

Bethlehem this day resembles heaven; hearing from the stars the singing of angelic voices; and in place of the sun, enfolds within itself on every side the Sun of Justice.

This day He Who Is, is Born; and He Who Is becomes what He was not. For when He was God, He became man; yet not departing from the Godhead that is His. Nor yet by any loss of divinity became He man, nor through increase became he God from man; but being the Word He became flesh, His nature, because of impassibility, remaining unchanged.

From St. Athanasius the Great:

The incorporeal and incorruptible and immaterial Word of God entered our world. In one sense, indeed, He was not far From it before, for no part of creation had ever been without Him Who, while ever abiding in union with the Father, yet fills all things that are. But now He entered the world in a new way, stooping to our level in His love and Self-revealing to us.

From St. Ephraim the Syrian, Hymns on the Nativity:

He became a servant on earth; He was Lord on high. Inheritor of the height and depth, who became a stranger. But the One who was judged wrongly will judge in truth, and He in Whose face they spat, breathed the spirit into the face. He who held a weak reed was the scepter for the world that grows old and leans on Him. He who stood [and] served His servants, sitting, will be worshipped. He Whom the Scribes scorned — the Seraphim sang “holy” before Him.

He who sits at the right hand of the Father goes without shelter at the inn, that He may for us prepare many mansions in the house of His heavenly Father… He was born, not in the house of His parents, but at the inn, by the wayside, because through the mystery of the Incarnation He is become the Way, by which He guides us to our home.

WHEN Mary laid Jesus Christ upon her knees, when she searched him with her eyes, when she fed him at the breast, she did not study to love him because she ought, she loved him because he was dear: he was her Son. His conception had been supernatural, perplexing, affrighting; it had called for faith in the incomprehensible, and obedience beyond the limit of human power. His nativity was human and sweet, and the love with which she embraced it was a natural growth, inseparable from the thing she loved. She was blessed above all creatures, because she loved her Maker inevitably and by simple nature; even though it needed the sword—wounds of the Passion to teach her fully that it was her Maker whom she loved. The Son of Mary is the Son of all human kind; we embrace him with the love of our kind, that we may be led up with Mary to a love beyond kind, a selfless love for the supreme Goodness, when we too shall have climbed the ladder of the cross. 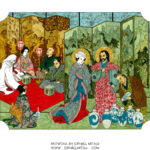