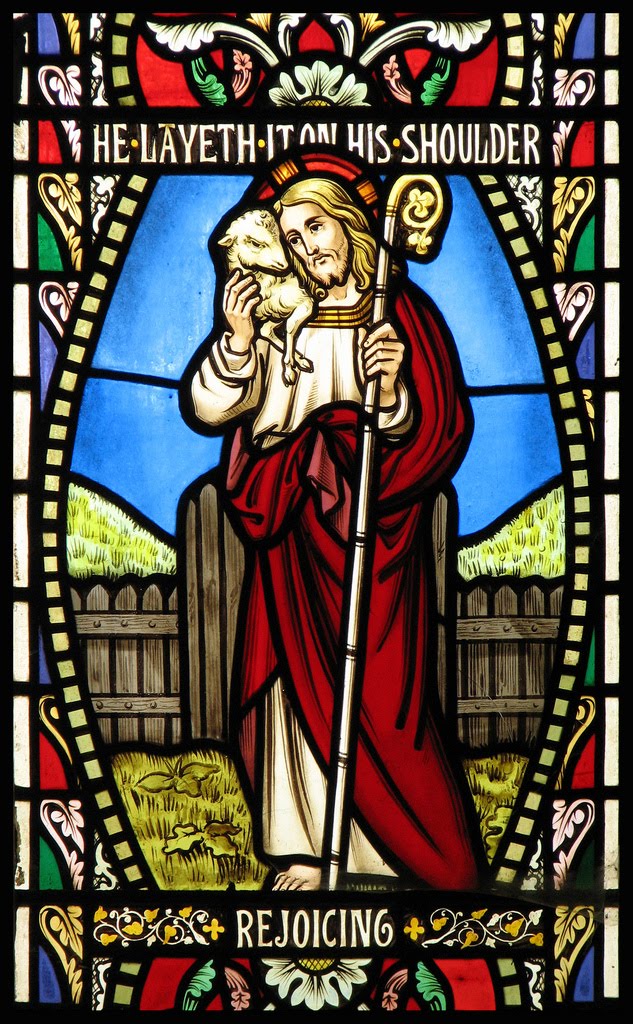 I want to begin with the parable of the Good Shepherd from which this 2nd Sunday after Easter takes its name. And we shall return to the first day of Jesus’ resurrection and look at his activities – that would be his appearances to Mary, to the Emmaus disciples and then his appearance to the disciples who had gathered around Peter in Jerusalem. The parable of the Good Shepherd adds to our understanding of that first resurrection day.

The image of sheep, shepherds and thieves comes to us deep from within the Old Testament and the life of ancient Israel. Ezekiel used the metaphor of shepherding to denounce Israel’s leaders, who like bad shepherds, fed upon the flock, ruled violently and permitted the sheep to scatter carelessly through every mountain and upon every hill. There were also godly shepherds in Israel like Moses and Aaron and one day, the prophets said, another shepherd will come, a branch from the stem of David and he will gather together God’s flock.

In the New Testament these old stories full of evocative images and metaphors, warnings, and promises come to light upon Jesus Christ as the Holy Spirit lit upon him at his baptism. Jesus is the shepherd of the prophet’s dreams. But important as the Old Testament background is to our Lord’s identity, the Old Testament never adequately puts forth the “highest truth of the Christian revelation.” What is that highest truth? It is the answer to the question: “What makes the Good Shepherd good?”

Our Gospel for today is cut from the middle of a slab of text in John Chapter 10 on the Good Shepherd. Jesus began with a parable about sheep and shepherds, folds and doors and thieves. But, consistently with Gospels, when Jesus finished the parable no one understood what he was talking about. Today’s Gospel picks up with his interpretation of the parable and it is with that explanation that he lays out the high truth I have referred to. He makes several big points: Jesus is the Door to the sheepfold. Real shepherds, real Christian pastors, enter the sheepfold through the Door. A sheepfold was often fashioned from the courtyard that adjoined the owner’s house. The shepherd tended to the sheep and even entered the home through a single door in the wall of the courtyard. There was a doorkeeper and the shepherd entered only with his consent. Thieves and robbers had to sneak around and get at the sheep by climbing the wall in darkness. Jesus said, “I am the Door.” Jesus is the Door; he is the way, the only way, the only Door through which men and women may come to the Father. And furthermore the real Christian shepherd has access to the sheep and performs his ministry only through the Door of Jesus Christ. There are those from without who may lay claim to the sheep but they have no authentic claim because they do not come through Jesus:

The thief and the robber are always with us, always attempting to take the sheep. But the point John makes is that any claim past, present or future to give life except through Jesus Christ is in fact destructive to life. Any claim of allegiance or loyally or love or commitment in competition with Jesus is demonic. Any denigration of the historical revelation of God in his son Jesus Christ denies the truth of our salvation and destroys the Church. Jesus is the only Door:

“No one cometh unto the Father, but through me.”

Now having established that, the Evangelist comes to the highest Christian truth. “What makes the Good Shepherd good?” It is this: the life the world will be saved through the voluntary death of Jesus the Messiah.

Jesus himself does not use the adjective “good” until this moment in his interpretation of the parable. The Shepherd of Israel is not good because he covers himself with a Greek philosopher’s robe unifying beauty, goodness and truth. He is not the Good Shepherd because he “tends his flock perfectly without any failure of foresight or tenderness, of courage or unselfishness.” All that is true as parts of the whole, but the highest truth is that our common life in the Church, our whole life in the Christian Community depends entirely upon the death of Jesus the Messiah. It is his willingness to lay down his life for his sheep that brings Jesus to identify himself as the Good Shepherd.

Now let’s look at the first day of the resurrection.

One of the marks of the Good Shepherd that Christ repeats over and over again in this text is that his sheep know his voice. This is poignantly shown in our Lord’s first resurrection appearance to Mary. After mistaking him for the gardener, he had only to speak her name – Mary – and she instantly knew that the man before her was Jesus. Without any categories to understand what was happening right before her eyes, without understanding, Mary turned to him and gave herself to his love. Then Mary, at Jesus’ commission, ran to the Apostles declaring, “I have seen the Lord!” That was early on the first Easter morning.

Later on that same day, two of Jesus’ disciples set out from Jerusalem to their home in Emmaus. As they walked along the road Jesus joined them but they did not recognize him. They were dejected and downhearted and Jesus asked them why? They were dumbfounded that anyone could have been in Jerusalem and not know what had happened to Jesus.

“Jesus of Nazareth,” they said, “a prophet, a worker of miracles, a wonderful teacher. Our chief priest and rulers delivered him up and had him crucified! That was three days ago! And now some of our women when to the tomb and they could not find his body and some even say they saw an angel who said Jesus was alive. Some of our men went to the tomb and found it just as the women had said. But they did not see Jesus.”

At this point Jesus responded: “You are being foolish and stubborn in your unbelief!” And with that, starting with Moses and all the prophets and showed them how the Messiah had to suffer those very things to enter into his glory. He reminded them that what made the Good Shepherd good was his willingness to die for his sheep.

It was getting dark and they begged him to stay for the night. He pretended he was going on, but they begged him all the more and he went into their home. While they were eating he took bread and blessed it, broke it and suddenly their eyes were opened and they recognized him as Jesus and then he vanished! Here the Good Shepherd seeks out his scattered sheep to bring his one flock back together. Right then, through the darkness, they walked all the way back to Jerusalem and found the 11 gathered in a well-lighted room. By returning to the Apostles they return to the Light. Even before they could speak the Apostles shouted out: “The Lord indeed has been raised and has appeared to Simon Peter.” The Emmaus disciples then told them, “Yes, he appeared to us as well, in the breaking of the bread.” And right then, Jesus himself, body and all, stood in the midst of them! Now with that last appearance of Jesus we have the evening, late evening and the end of the first day.

The Emmaus disciples were downhearted for the same reasons that all of Jesus’ disciples were downhearted: they loved him and he had died an unimaginable death. And even though Jesus had frequently taught them that he would suffer such a death, none of them were prepared for the reality and when it happened their world fell apart. Everything Jesus had said or did ended in tragedy.

The last thing I want you to see is that as soon as they recognized Jesus he vanished and without deliberation they made a beeline through the dark night to the 11 where there was light. Who else made a beeline to the 11? Mary Magdalene did. Why? The Good Shepherd had been smitten down and his sheep scattered, just as he had said. But the Shepherd sought for his sheep and brought them back to the flock which meant back to the Apostles, the true shepherds.

What we see happening the first resurrection day is the gathering together of the Messiah’s scattered sheep into one flock. And note that the one flock on the first day of the resurrection gathers around the 11 Apostles, the true shepherds of Christ, who have themselves entered through the Door of Christ. And when the one flock has gathered around the 11 Christ stands in the midst of them. To follow Christ we must follow his Apostles.