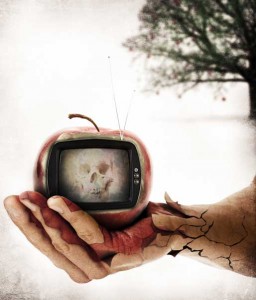 Though man’s nature is essentially good, he is not capable of realizing that good, saving himself from sin and entering into God’s Kingdom as God’s own child. His “budding splendor” will never reach fruition apart from the intrusive grace of God. Man is born, as we have seen, not only deprived of the supernatural grace that Adam knew, but he is born with wounds inherited from the fall. This condition of original sin, left unchanged, will eventually result in his eternal death. The potential for perpetual alienation from God looms large unless drastic action is taken. Remember that man is born deprived of the Holy Spirit, deprived of God’s paternity and in a state of sin: thus he could not take that drastic action on behalf of himself or others.

The wounds we have inherited from the fall have brought about a destructive disharmony in our soul. This disharmony of the soul is not merely a matter of feelings; these wounds of the fall are not superficial; they have left us in a state of sin and death — an unresponsive state to God’s truth, goodness, and beauty — that will only become more and more destructive, more and more alienated from God and all that matters in life. If we are left to our own devices and ourselves, we are hopelessly doomed to failure. In his Confessions, St. Augustine wrote this personal observation that describes such a state of being:

“The enemy held fast my will, and had made of it a chain, and had bound me tight with it. For out of the perverse will comes lust, and the service of lust ended in habit, and habit, not resisted, became necessity. By these links, as it were forged together – a hard bondage held me in slavery.”

This slavery in man’s nature is seen classically in the four wounds of original sin. Thomas Aquinas refers to the four wounds in his Summa, but before him the Venerable Bede, an Anglican monk and the author of the first history of the Church in England, cited them as the existential results of the fall; each wound impairs a major faculty of the soul.