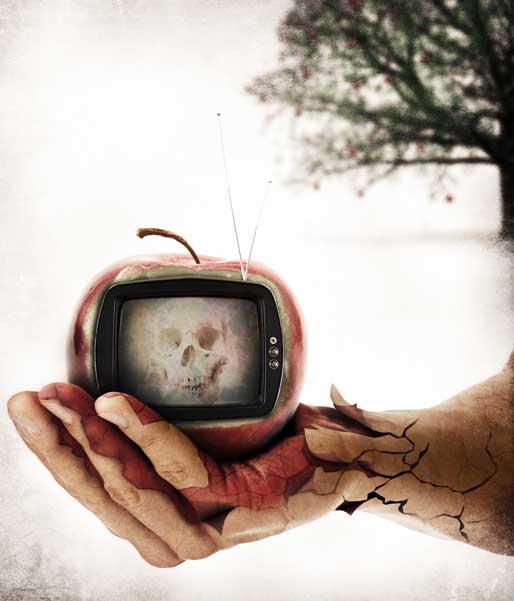 The first wound is blindness or ignorance, which is our loss of the intellectual capacity to know and form judgments concerning spiritual things. St. Paul explains: “But the natural man receives not the things of the Spirit of God: for they are foolishness to him: neither can he know them, because they are spiritually discerned. But he that is spiritual judgeth all things, yet he himself is judged of no man” (I Corinthians 14:15). As a result of the wound of blindness, man’s conscience is an unreliable and often dormant faculty. We are especially poor in forming correct judgments about ourselves. We quickly judge others, but when it comes to honestly judging our own behavior, intention, and desire, we do a pitiable job.

The second wound, malice, is in the faculty of our will. Malice comes from the Latin malum, which means evil. God has made the will of man wanting the good. In itself, our will harkens after the true, the good, and the beautiful, but original sin hinders our ability to realize God’s good intentions for our life. In this vivid passage from Roman 7:14-24, St. Paul opens his heart that we might see our doomed struggle against malice:

“For we know that the law is spiritual: but I am carnal, sold under sin. For that which I do I allow not: for what I would, that do I not; but what I hate, that do I. If then I do that which I would not, I consent unto the law that it is good. Now then it is no more I that do it, but sin that dwelleth in me. For I know that in me (that is, in my flesh), dwelleth no good thing: for to will is present with me; but how to perform that which is good I find not. For the good that I would I do not: but the evil which I would not, that I do. Now if I do that I would not, it is no more I that do it, but sin that dwelleth in me. I find then a law, that, when I would do good, evil is present with me. For I delight in the law of God after the inward man: But I see another law in my members, warring against the law of my mind, and bringing me into captivity to the law of sin which is in my members. O wretched man that I am! who shall deliver me from the body of this death?”

The fall has impaired our will so that when a strong, personal defense is called for, or when we need to make an offense, we falter, and we do not have the strength of will to persevere.

The third wound is concupiscence, which is the disordered desire to fulfill our immediate sensual needs. Notice that the third wound is the “disordered desire,” rather than our “immediate sensual needs.” Most people need sleep, food, drink, and warmth in the winter, clothing, sexual love, and physical exercise all in differing degrees for different people. Some need sexual love and physical exercise while others live perfectly happy and full lives without them. But it is important to realize that sensual needs are not sinful. God has made human beings this way and the fact of the matter is that Adam and Eve had sensual needs before and after the fall. The difference they experienced after the fall was that concupiscence, once a mere need, became their soul’s driving force.

And finally, the fourth wound is weakness, the failure of our will to muster a personal offense against evil. The first two wounds touch upon what used to be called the spiritual faculties: the intelligence and the will. The last two, concupiscence and weakness, touch upon our passions. Life is hard and the good is hard to attain. It requires a lot of energy to lay hold of it. We need strength, but the wound of weakness deprives us of the very virtue we need. We are lazy and we don’t want to make too many efforts. We want to get everything the easy way and this is a hallmark of original sin: “I want what I want when I want it.”

The upshot is that these wounds are lethal. Man is powerless to redeem himself from this condition of original sin. Try as he may over and over again to reform himself, he will fail, because reformation is not what he needs. Sin breeds more sin and more disorder and we end up, as the BCP puts it, “tied and bound with the chain of our sins” (BCP p.63). But even in this condition human nature itself is not essentially corrupt. It is wounded by suffering the loss of the supernatural gift of the Holy Spirit, who reanimated and unified Adam’s powers and faculties in a free and godly harmony. Instead of the love of God, which is true reason, ruling from the center of our being and uniting our faculties around that one great love, we now have “self,” and thus, concupiscence at the center. This marred and insufficient “self” will be led on to destruction by concupiscence.

When we say that man is “good” we do not mean “good” in the sense that he is whole and in a state of salvation. It is not the case that he is capable of saving himself, nor is he capable of loving God by his natural virtues. Though our human virtues are real, and we may even feel a sense of being haunted by them, the fall has left us incapable of singularly willing the good apart from the grace of God. Human nature is still human nature. Human beings have not become the worse they can become, nor have they become non-human. Rather, after the fall, disordered human nature, lacking the good, is incapable of truly knowing and firmly willing, much less finally achieving, the good apart from the grace of God.