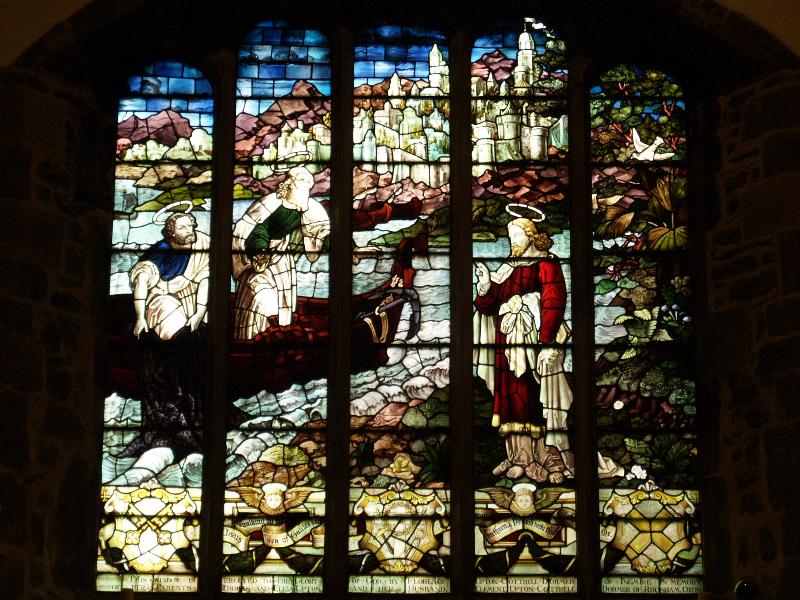 “Then those men, when they had seen the miracle that Jesus did, said, This is of a truth that prophet that should come into the world.”

Chapter Six of John is a big chapter in many ways. With 71 verses, it is the longest chapter in the Gospel. It covers a varied piece of geography beginning with the miraculous feeding at the foot of a mountain; followed up with Jesus walking on the Sea of Galilee; and then across that body of water onto a synagogue in Capernaum where he opened up the great spiritual significance of the miraculous feeding.

This is what happened. John tells us that Jesus crossed the Sea of Galilee to the side opposite Capernaum and that a crowd of about 5,000 followed him because they saw his miracles. John also tells us that the Passover was near. The nearness of the Passover explains why the grass was flourishing. Mark even includes in his Gospel that the grass was green. All this adds up to a genuine historical memory of the Church – an account with a mix of different details from eyewitnesses. Furthermore, John’s reference to the Passover sets the theological context for the incredible discussion in the synagogue. What is central to the Passover? The Paschal Lamb. And what happens to a Paschal Lamb? It is eaten.

Now, back at the foot of the mountain, John tells us that Jesus saw all these people coming and he wanted to provide food for them. After asking some leading questions to his disciples he finally had everyone make use of all that grass by sitting down. He then took five barley loaves and two small fishes that a little boy had given him and proceeded to multiply the food – passing it on to his disciples who in turn passed it on to the people sitting in the grass, who ate until they had eaten their fill. Afterward Jesus had his disciples gather up the fragments that filled twelve baskets.

Some scholars doubt the possibility of nature miracles like the feeding of the five thousand or turning water into wine. Their skepticism does not rise from concentrated thought or reasoning, but from purely antisupernaturalistic presuppositions. I would say, in fact, that this antisupernaturalism has nothing whatsoever to do with any philosophical, historical or empirical investigations. Their bias has its origin in seventeenth and eighteenth-century Enlightenment Rationalism and it has simply become the cherished little darling of the Academy. Their own prejudices, their own presuppositions remain unscrutinized. David Hume, Spinoza, Schleiermacher, Hegel all canonized what they considered modern intellectual sophistication as over against the ancient, mythical religion of Christ. The miraculous, that pathetic delusion of primitive non-white, non-Europeans, is simply not possible. Jefferson knew better than his benighted slaves. He took a razor blade to the New Testament and removed any hint of the miraculous. And yet the arguments against miracles by David Hume and Spinoza and Jefferson and all the others only make sense based on the presuppositions of their age – not our own age. The presupposition against miracles in the Academy today is a hangover from the age of Deism. It is prejudicial, unproven, and outdated. The even more modern, the post-modern view, rightly sees this academic obsession with the so-called “modern worldview of reality” as culturally conditioned, relative to history and in no way absolute. It seems that the iceberg of antisupernaturalism may be feeling a little bit of heat! The dismissal of miracles without even appealing to thoughtful philosophical arguments and empirical data is being revealed for what it is: a subculture of nineteenth and midtwentieth-century White, European academic elitism.

For goodness sake don’t let them push your around in your thought life! Their point-of-view is slowly and surely sinking into oblivion.

In fact, if we return to our text, we may discover that these prejudicial folk of the academy share a problem that keeps cropping up in the Gospel of John – namely they lack imagination and they seem unable to see beyond the merely natural and literal. Our Gospel today ends with the declaration of the well-fed multitude:

“This is of a truth that prophet that should come into the world.”

But the next thing you know they tried to take Jesus by force and make him the King of Israel. Why did they do that? Because Jesus gave them free food, that is why. After they followed him to Capernaum Jesus spoke to them in a synagogue:

But they were only interested in the food that perishes. They are literalist, and unimaginative like so many others in the Gospel of John. When Jesus told Nicodemius that he had to be “born again” in order to enter into eternal life, Nicodemus said:

“Can a man enter the second time his mother’s womb and
be born?”

When Jesus told the woman at the well that if she believed on him he would give her water and she would never thirst again. And she said to him:

“Sir, give me this water, that I may not thirst, nor come here to draw water again.”

When his disciples showed up at the well with food they urged him to eat and he said:

“I have food to eat of which you do not know.”

So his disciples said to one another:

“Has any one brought him food?”

And so Jesus explained:

“Mama Mia! My food is to do the will of him who sent me, and to accomplish his work.”

So over toward the end of Chapter six when Jesus began to teach all these people who had followed him to Capernaum, he told them to seek the food that provides eternal life.

And then they said to Jesus:

“What must we do to do the works of God?”

“This is the work of God – believe in him whom God has sent.” In other words, “Believe in me, Jesus the Messiah, whom the Father has sent.”

“Then what sign do you do that we may see, and believe you?
God fed our fathers in the wilderness with manna. Do that! Let us see manna raining down from heaven like Moses gave us.”

With cynicism like that they would have a promising future in politics today. Their naive literalism is matched only by their self-interest. “Hey Jesus what have you done for me lately?” They still want free food. They do not want to really see Jesus and believe in Jesus. They simply want more free food from a purely earthly king, a merely earthly messiah. A political messiah who will bring not only liberation from Rome, but liberation from labor. They do not care about liberation from their sins.

But we only have one Jesus and he is certainly not an earthly king:

“Your fathers did eat manna in the wilderness and they are all dead. And Moses did not give even that bread – my Father did that. But now the Father has given the Bread of Heaven for the life of the world.”

They all cry out:

“Lord, give us this bread, always!”

“I am the bread of life… I have come down from heaven to do my Father’s will. And the Father’s will is that everyone who sees the Son and believes in him will have eternal life.”

Well that was something of a cold blanket thrown over the festivities! The Bible says that the Jews started arguing with one another:

“Hey wait a minute! Isn’t this the son of the carpenter? We know his mother! And now he says he came down from heaven! He says he is the Bread of Heaven sent down from God!”

Then Jesus really ups the ante:

“Unless you eat the flesh of the son of man and drink his blood there is no life in you! My flesh is true food. My blood is true drink.”

Not only the free loaders, but also most of his disciples left him right then. “This is a hard saying,” they responded.

Ingesting Jesus is the prerequisite for eternal life.

And then Jesus seems to turn it all around:

“The flesh is of no avail. The words I have spoken to you are spirit and life.”

What was he talking about? Did Jesus deny every thing he had said up to this point and everything the Evangelist had declared concerning the Incarnation? Did Jesus fall back upon a crude dualism?

No he has not. This is like what he spoke to Nicodemus about the new birth:

What is Jesus saying? He is saying that flesh can only produce flesh, it cannot produce what it is not, namely spirit, namely eternal life. The visible, material world, including the flesh of Jesus the Son of God, is nothing if considered as existing in and of itself and if its goal and purpose is only what it makes of itself. If history ends in only a material, worldly kingdom, if the order of nature is exhausted in physical reproduction, if religion asserts that mere materiality and nothing more is the meaning of existence – if that’s all there is – it is profitless and we are pitiful. Please see how this naïve literalism is also the love child of the Enlightenment and the Academy.

But that is exactly what Jesus cleared up. The Church is the spiritual household of God not because it is divorced from the physical world, but because Flesh has been submitted to the Spirit through the Incarnation and vivified. The Body of Christ and the bodies of those who believe in Him are living flesh; the water, bread, and wine have been vivified as the means by which this transformation may be effected. Christianity is neither crude materialism nor the religion of pure spirit. It is the revealed religion of the Son of God made the Son of Man. So we can revisit the opening declaration from the higher point-of-view that Jesus has given us:

“This is of a truth that prophet that should come into the world.”