Some Music for Easter

Bach and Luther greet the Resurrection

To the right is a triumphant illustration of the Resurrection reproduced from the front of a 1769 Luther Bible, an appropriate image to introduce Johann Sebastian Bach’s Cantata No. 4, Christ lag in Todes Banden (“Christ lay in death’s bonds”). The work is one of Bach’s earliest cantatas, probably intended for a performance at Easter in 1707 (when Bach saw a stripling of 22!). John Eliot Gardiner describes the work as Bach’s “first-known attempt at painting narrative in music.”

It is a chorale cantata, a type of composition in which both text and music are based on a Lutheran hymn, in this case the hymn of the same name by Martin Luther. The tune of this hymn was based on the Gregorian chant melody, Victimae Paschali lauded, which we sing in English translation as a sequence hymn on Easter Sunday. In each of the seven vocal movements of his cantata, Bach used the words of one of the seven stanzas of the chorale, and its tune as a cantus firms.

You may read more about the work 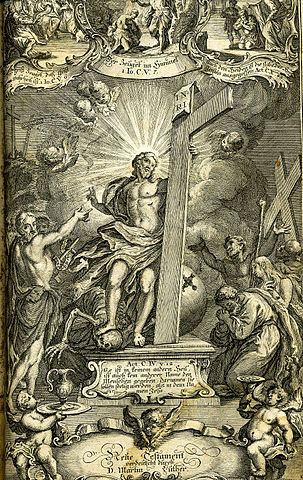