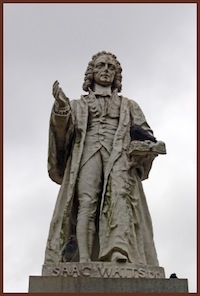 Isaac Watts (1674-1748) was the most prolific and influential of English-language hymn writers. According to tradition, the young nonconformist Watts found the hymns sung at the family’s chapel in Southampton to be dull and dreary. Young Isaac’s father exhorted him be less censorious unless he thought he could do better. This fatherly advice has served the Church remarkably well. Watts’s hymns have in fact been much better than many that he sang as a boy. His hymns were written for the small Dissenting community (i.e., Protestants who did not belong to the Church of England), but they have come to be embraced by virtually all branches of Christianity. Among them are “Joy to the world,” “Jesus shall reign where’er the sun,” “O God, our Help in ages past,” and “Alas! and did my Saviour bleed.” As Samuel Johnson remarked, Watts demonstrated “that zeal and purity might be expressed and enforced by polished diction,” a lesson that has often been forgotten or neglected. Watts’s texts combine a rich theological understanding with an existential perspective on the experience of salvation.