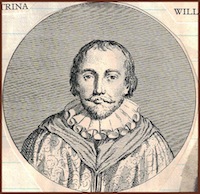 Orlando Gibbons (1583-1625) was one of the most accomplished of the early seventeenth-century English composers. Celebrated for his instrumental music as well as his compositions for choirs, Gibbons became a choirster of King’s College, Cambridge at the age of 12. When he was 21, he was appointed organist of the Chapel Royal, and continued to receive many expressions of royal favor. In 1623, he became organist at Westminster Abbey, where he later officiated at the funeral service of King James I.

About 40 anthems and 17 hymn tunes by Gibbons are still in existence and sung regularly, as are some of his his madrigals. His keyboard music and music for viols is also frequently played and recorded. The legendary pianist Glenn Gould—celebrated for his recordings of Bach’s keyboard works—also recorded many pieces by Gibbons and once named Gibbons his favorite composer.

Gibbons lived in a time when the rich polyphony of the late Renaissance was giving way to a more homophonic style. His own work expresses a subtle mastery of the more intricate polyphony of his fellow countrymen William Byrd and Thomas Tallis. His setting of the collect for the Third Sunday after Epiphany, “Almighty and Everlasting God,” is one of his most impressive works, and his settings of the canticles regularly used for Evensong (Magnificat and Nunc Dimittis), settings know as the “Short Service,” were the most popular settings of their day.

Several of Gibbons’s hymn tunes are in our Hymnal. The Lenten hymn #69, “Drop, drop, slow tears,” is set to the tune known as SONG 46. The tune SONG 1 is not as well known, in part because the text that accompanies it in our hymnal (#470) is not terribly inspired. But SONG 34, on the other hand (also known as ANGEL’S SONG) is featured in hymn #573 with a wonderful text by Horatius Bonar, “Go, labor on!” All of Gibbons’s hymn tunes rely on rich harmonies in the voices—a good incentive to learn to sing hymns in parts!