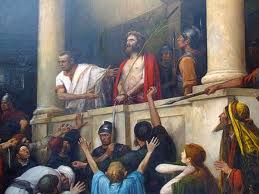 Then the soldiers of the governor took Jesus into the common hall, and gathered unto him the whole band of soldiers: and they stripped him, and put on him a scarlet robe: and when they had platted a crown of thorns they put it upon his head, and a reed in his right hand. And they bowed the knee before him, and mocked him, saying: ‘Hail, King of the Jews.’

Here is the young man we have been following since Epiphany. After his twelfth year he was so unimposing as nearly to disappear. But then he showed up on the banks for the Jordon when he was about twenty-eight-years-old and we have followed him ever since. He did not stride through Israel three feet off the ground, arrayed in the splendor of the Shekinah. A Samaritan woman drawing water from a well identified him as a Jewish man – that is all, at first. He was indeed a man or as Pilate would put it “The Man.” By simply looking at him you would not have guessed that he could walk on water, heal the sick with his touch, multiply the loaves and fishes, raise the dead, forgive sin, terrify demons, and enrage the priestly elite of Israel. But he did. The Jews had attempted to take him several times, but he simply walked away. They could not take him. Not until he wanted them to. No one took his life from him; he offered it up by his own free will. When Judas betrayed him in the Garden a band of Roman soldiers accompanied the Jews. Apparently they were expecting a fight. “Whom seek ye?” said Jesus. “Jesus of Nazareth,” they answered. “I am he,” Jesus said. The Bible records that when he spoke the whole lot stepped backward and fell on the ground. Slain in the spirit.

By the way, the term “band of soldiers” is a technical military term for the Romans and it means a “cohort” or 600 soldiers; although in this context it might be what they called a “maniple” which would be 200 soldiers. That would be in addition to the Temple officers who were carrying clubs. Imagine that. There was a full moon that night and some of them carried torches. The place would have been well lit. At any rate when Jesus said, “I am he,” they all fell to the ground – several hundred of them. He waited for them to get up and then he gave himself over to them. There are the facts.

Just prior to this moment he had gathered up his men after instituting the Blessed Sacrament and came into this garden to pray:

“Father, glorify thou me in thy own presence with the glory which I had with thee before the world was…”

“I have given (my sheep) the words which thou gavest me, and they have received them and know in truth that I came from thee…”

“Father, I desire that they also…may be with me where I am, to behold my glory which thou hast given me in thy love for me before the foundation of the world.”

Having gathered strength from his Father in the garden he then opened himself up completely to Satan’s final assault. His hour had come upon the world. Now was the moment of his glory. The First Adam had secretly opened himself up to Satan in a garden and he believed a lie against God; the Last Adam, in a garden, publically opened himself up to the raging beast and declared the truth of God in perfect obedience. Satan is a liar. Jesus Christ is the Way, the Truth and the Life. After the beast had finished with him, Jesus was covered with the glory of his obedience and love for his Father, the glory of the Cross. And he was laid in another garden that would soon spring to life, completely reversing the loss in the first garden. The officers of the elite priests and the Roman soldiers did not know it at the moment of his arrest, but Jesus was about to take away the sin of the world for good and by his death he was about to trample down death itself.

After his arrest they took him to the Chief Priests and then they handed him over to the Romans, just like Jesus said they would. Pilate’s residence was in Caesarea, but during feasts he was in Jerusalem because he was expected to oversee the maintenance of order when the population of the city swelled with pilgrims. He stayed at Herod’s palace and that is where they brought Jesus. Pilate was reluctant to hear the case brought against Jesus and he told the Jews to deal with him according to their own law. He thus acknowledged or at least granted them capital punishment. But according to their law Jesus would have to be stoned to death and they for whatever reasons did not want to do that and so they handed it back to Pilate. John’s Gospel makes a point of their unwillingness to stone him because it was for the purpose:

“That the word of Jesus might be fulfilled, which he spake, signifying by what manner of death he should die.”

Pilate examined Jesus privately at least two times and finally he had him scourged and then brought out to the crowd one last time. The Gospel of John states that Pilate actually tried to release him but the Jews cried out that if he released Jesus he was not “the friend of Caesar.” Jesus claimed to be a King and Caesar would have not competition. It was about 9:00 a.m. Then Pilate declared:

“’Should I crucify your King? And the chief priests answered, “We have no king but Caesar.’ Then he delivered Jesus to the soldiers to be crucified.”

“We have no King but Caesar!” And with that formal, public apostasy Israel hands over their Messiah to the Romans just as Jesus said they would. In a theological sense Pilate, unaware of what he was doing, was offering Israel an opportunity to do the right thing and own Jesus as their Messiah. He held out to that generation two paths; one path would lead to life and the other would lead to death. They chose death. The rejection of Jesus by the Jews is their formal denial of the Sovereignty of God. By proceeding with the execution of the Messiah in defense of the majesty of Caesar, the mystery of iniquity is consummated and the blasphemy of Israel is complete. It is foolishness and an evil to teach that salvation may be had through being a faithful Jew. That is a lie. Jesus said:

“I am the way, the truth and the life. No one comes to the Father but by me.”

The Roman soldiers quickly took Jesus off to Golgotha, a high spot not far away. As Isaac bore, upon his back, the wood for his burnt offering, so Jesus is led out of Jerusalem bearing his own cross upon his bruised shoulders. There they nailed him to the cross. He was placed between two criminals, probably subversives, and his cross would have been a bit higher than their crosses since he was the important person being executed. The crosses of the criminals would have been seven or eight feet high; Jesus’ cross would have been no more than nine or ten feet high. The Romans wanted their feet just off the ground for heartless reasons.

The Chief Priests followed and stood by the cross mocking him:

“If thou be the Son of God come down from the cross.”

We have heard that voice before:

“If thou be the Son of God turn these stones into bread.”

“He saved other, himself he cannot save: if he be the King of Israel, let him now come down from the cross,
and we will believe him…”

“Show us a sign from heaven and we will believe in you.”

Ironically, they are right:

“He saved others, himself he cannot save.”

Yes. That is true. He cannot save himself by coming down off the cross because he is there for our salvation. For him to come down from the cross would mean that salvation would never come into the world. This is another satanic temptation of Jesus. They offer to believe in him if he will only come down from the cross. Satan had offered him the Kingdom if he would bow down to him. Jesus is tested on the cross: he can have the people’s allegiance if he will just forsake his Father’s way of getting it. But Jesus himself models the sacrificial life of discipleship for his Church: whoever wishes to save his life will lose it.
Jesus gave eternal life to the Church. As Jesus walked the way of sorrow and as the soldiers drove the nails into his hands, as water and blood flowed from His precious side His thoughts, I submit beloved, were focused on two things – His Father and His Church. He was there out of devotion, loyalty and love to His Father and on behalf of His Bride. Love was the rope about His wrist. Love was the only nail that held him tight to the cross. Love for you. Love for those we love. Love for those we hate. Love for those who have died. Love for sons and daughters yet to be born.

That young man who died on the cross is God. He has taken our nature into himself and became one of us – body and all. And he has made us partakers of the Divine nature. He has emptied himself for love of his Father and you. Now you are called to empty yourself for love of him and others.