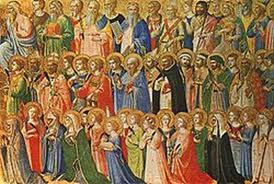 In the Old Testament and the New Testament the God we worship declares himself to be the God of people who lived thousands of years ago. These are people for whom we have the highest regard, but we know them only through the witness of other people. He is the God of Abraham, Isaac, and Jacob; the God of Moses and Miriam, of Peter and Paul, of the Blessed Virgin Mary and of her son, our Lord Jesus Christ. This God has been busy gathering a people from the very beginning. That gathering reached its zenith when Jesus Christ came from his Father to plant his Church. The Psalmist sings a prophecy: “Hear, O Shepherd of Israel, thou that leadest Joseph like a flock… Thou hast brought a Vine out of Egypt; thou hast planted it. Thou madest room for it; and when it had taken root, it filled the land.”

Jesus called twelve apostles who, not coincidentally, correspond in number to the twelve patriarchs of Israel. He taught them the truth about both God and man. He taught them how to pray and he worked miracles. He gave them the sacraments. He was fearless in his love for them and his love and loyalty to his Father. He finally died on the cross for the sins of the whole world, but that was not the end of him or them. He was raised from the dead, body and all, and forty days after that he ascended to his Father, just like he said he would. And on Pentecost, the Father answered the prayer of his Son by pouring out his Holy Spirit upon the friends Jesus had left behind. As a result, what he left behind was not merely a gathering of individual believers whose whole loyalty and life belonged to him, but rather, what he left here (that was not here before his came) he identified as his Church. At Pentecost his friends were regenerated by the Holy Spirit, born again into his Father’s family and made Jesus’ siblings. What the Apostles experienced at Pentecost, we have experienced in Holy Baptism. The Church is an organism, an alien life form, from a kingdom not of this world; unknown till Jesus generated it over two thousand years ago.