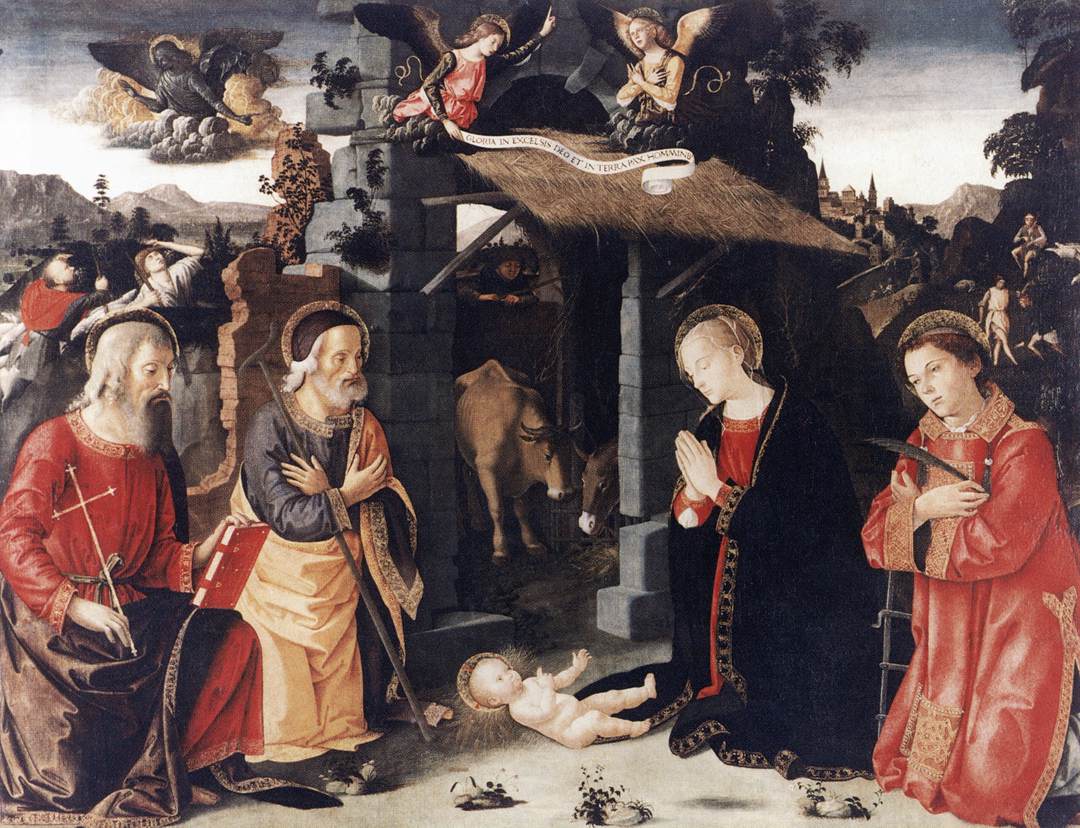 And the Word was made flesh and dwelt among us, (and we beheld his glory, the glory as of the only begotten of the Father) full of grace and truth. John 1:14

Though Advent is not a penitential season, we do tend to avoid heavy feasting. And then when Christmas comes, our tables spread with sumptuous and savory delicacies, some of us tend to eat our selves into oblivion. Why do we go from feast to famine? “My body made me do it,” may well be the most honest answer to that question. One’s body certainly lets us know what it wants and when it wants it – one’s body stirs up one’s narcissism. Our bodies seem to know where happiness found; at least it feels that way. And yet the existential reality is that our bodies betray us. One’s body is a hopeless guide for the person because it only knows its immediate need. Furthermore our bodies seem to manipulate our emotions; our hope waxes with our vitality and then droops with our sagging, aging bodies. What odd creatures we are, a jumble of matter, mind, spirit and intelligence and feelings and passions – faculties that are not unified and harmonious, but rather, as a person, one seems to be at war with one’s self. My body wants control over me, but then my mind refuses to go away without a struggle. How can we expect to have peace with one another when we don’t even have real lasting peace within?

It would seem to many folk, often very religious folk, very “spiritual” folk, that our material part, this body of flesh, is the baser part – but not according to this Feast Day. According to the Nativity, God himself has become flesh. But why? Why has God Almighty who is Spirit, who, as the Westminster Confession rightly puts it, is “without body, parts or passions” – why has this God committed himself to human flesh? Why has the Second Person of the Blessed Trinity, the Eternal Word of the Father – why has God entered into our world as one of us?

What does that mean? Our Lord did not merely use human flesh as a means to an end. A minister in this city once told me that he believed that when Jesus ascended to the Father after his resurrection he simply shed his human body since its job had been done. That’s not true at all. The Incarnation is not an example of utilitarianism. Jesus did not throw away his flesh once his earthly work was finished. Not at all! He actually “became flesh.” He was conceived by the Holy Ghost of the Virgin Mary and grew in her womb as one person of flesh. Nine months later she gave birth to a child of flesh and blood – our flesh and blood. But at its best there is a problem with flesh. Flesh is not very stable. Flesh is not strong. Flesh has to be protected, covered up, and handled with care. Flesh is no match for stones or steel. No match for wood and fire. No match for nails. No match for bullets.

Permit me to say a word about evil – whether natural evil like floods or tornado and human evil like the obscenity of killing children in their school. There are those who will ask how a good God can permit such evil and that is a fair question. How can a good God permit that? The problem comes along with the supposed answers. There are usually two superficial solutions offered to explain evil. There is the point-of-view that God is simply detached, as in a deist god, or for some other reason god is not able to intervene in such evil. Neither of those suppositions is true. And then there is the equally superficial point-of-view that says that the atrocity is providential, even preordained by God for a mysterious good that we cannot fathom. Regardless of their denials, neither point-of-view is addressing the God of Jesus Christ. They are little gods – one is powerless and the other is frankly the author of evil. Both viewpoints are deceitful. The fact is that evil is always a violation of God’s will. God does not achieve the good by creating evil. He brings good out of evil, but he isn’t a Machiavellian. And the only answer I have to that or any other evil is not some quasi-Gnostic answer on God’s secret sovereign will, or a list of causes that explains it all. The only answer that works for me is what God has said himself:

God has entered into this broken world of suffering as a man of flesh himself. God’s answer to evil was not to become a superman that bullets would bounce off of, but rather he was made as vulnerable, as contingent, as weak and opened to death as any of us. He does not keep us at arm’s length – “God became flesh” and flesh is no match for nails or bullets. But nails and bullets are ultimately no match for God.

I don’t understand why God loves flesh, but he does. He has anchored his divine life; his unlimited power, his perfect beauty and his perfect love in our human flesh forever. The immutable, unchangeable, invisible God has become visible and he has entered so completely into our life that God has personally experienced our suffering himself.

Christ’s Incarnation has changed everything. St. Paul got it. Paul could almost say, “Just forget everything you thought you knew about God and man. Because God has become one of us!” And he has established a New Family in his old creation. And he has built his Family a Home of their own in Holy Mother Church. Through the sacrament of baptism children are born into that New Family. All of this is true because God has become flesh and that is why we are here today. As I have said many times before, a Man, a Human Being of flesh is seated at this moment upon Throne of the Universe. But before that, as a baby in swaddling cloths, Mary’s lap was the all-sufficient Throne of God.

This day we celebrate the Nativity of God Almighty, our only Savior Jesus Christ. This day we bow our knees and we worship the King of Kings our God Jesus Christ:

“For unto us a child is born, unto us a son is given: and the government shall be upon his shoulder: and his name shall be called Wonderful, Counselor, The mighty God, The everlasting Father, The prince of Peace.”