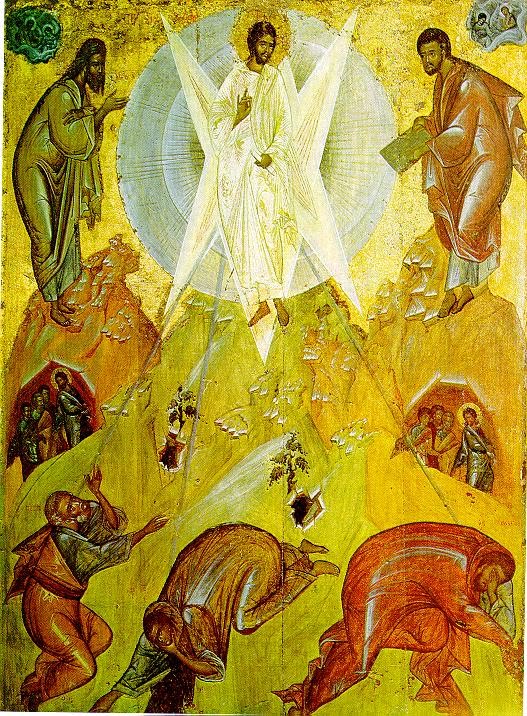 “By which he has granted to us his precious and very great promises, so that through them you may become partakers of the divine nature…” II Peter 1:4

The Gospel for today is taken from a part of the Gospel of John called the “Farewell Discourse” — the idea being that the timing of these discourses  (Chapters 14-17) are only hours from our Lord’s arrest in Gethsemane. These are words addressed to his inner circle of disciples at the last supper. It happened this way: Judas, having received his last bit of nourishment from Jesus’ hand, left the upper room. Then Jesus began the Farewell Discourse which continues to the end of John 17. John 18 begins with these fateful words:

“When Jesus had spoken these words, he went out with his disciples across the brook Kidron, where there was a garden, which he and his disciples entered.” John 18:1

That situates the Farewell Discourse as to time and place and that helps us understand its meaning and in particular the meaning of the text that I have chosen for today:

I have chosen this particular verse because it throws light on the subject of deification which I wish to preach on over the next several weeks. I have two reasons for this: First of all I am preaching on deification because I intend to preach through the Gospel of John, just as we worked our way through Romans, and this exploration of deification will especially prepare us for that study. The second reason I am preaching on deification is because the word can be off putting and confusing and it is my duty to clarify the doctrines of the Church and in so doing to eliminate, as best I can, ambiguity and confusion. What is deification? Deification is God’s finality for human beings. The difference is between the Creator and the most exalted creature is radically unrevisable; the Creator is self-subsistent; he depends on nothing and no one. The creature on the other hand is completely dependent upon the Creator for his very being and continued existence. Yet the fledging Church in Jerusalem, her memory of Jesus life, death, and resurrection yet fresh, declared her own self-understanding with the radical title of “children of God.” And that was not something she came up with on her on but rather it was given to her by Jesus himself who taught her to pray, “Our Father who art in heaven.” It is right there that we have the beginning of the Church’s understanding of deification and it does not end there as we shall see. But that will take some time. Let me make one more point: when I take my dog Duke to the vet his medical records are found under the name “Duke Spencer.” But no one in their right mind thinks Duke is my child. The state of transformation that God, through his grace, is effecting in human beings, the achievement of our full potential as human beings, is to be his children and only the word deification does justice to that reality — so thought the early Church Fathers. We are the children of God, not his pets.

Please note the importance the Beloved Disciple places upon seeing Jesus when he comes in glory and how that vision will bequeath knowledge of our selves and knowledge of God. Now lets look at the Gospel text for today:

Exactly what did Jesus promise his disciple in the upper room when he said, “A little while, and ye shall not see me: and again, a little while, and ye shall see me, because I go to the Father?” First of all I think it is certainly the case that he is referring to the fact that they will see him after his resurrection on three days from what was about to happen — though they could not have much grasped that he meant that since none of them had ever experienced a resurrection like his resurrection and frankly they did not know what he was talking about as the text itself shows. They did see him and they did rejoice. But with the figure of the woman in travail and the promise of everlasting joy, we are right to anticipate another vision of Jesus that will bring about final happiness to all of creation. Recall John’s epistle just cited:

The point that I am making is that the Vision of God, the Beatific Vision, is made possible through our deification  —  it is the outward and visible evidence of deification. Jesus said:

“Blessed are the pure in heart: for they shall see God.” Matthew 5:8

Salvation in the most complete sense of the word means to be made whole, to grow into our full potential as human beings, to realize our destiny as deified creatures meant for the Beatific Vision, bound to behold God face-to-face. In a manner of speaking deification enables us to see the majesty and glory of God through God’s own eyes, through divine eyes. That is our true beatitude, our true happiness, our portion as human beings, the perfection of our nature by grace. Remember this: grace perfects our nature, grace  does not annihilate nature; the supernatural grace of God enables us to realize our natural destiny as children of God participating in the divine nature of the God who is God. In his high priestly prayer in John 17 Jesus brings before his Father the destiny of the children of God:

“Father, I desire that they also, whom you have given me, may be with me where I am, to see my glory that you have given me because you loved me before the foundation of the world.” John 17:24

Someone this past Wednesday night asked me when the idea of our deification first came up in the Church and was it in the Bible. These are first rate questions and first in the sense of being the first sort of questions we ought to ask concerning all we believe and hold to be reality — it goes for our Lord Jesus Christ, it goes for his mother the Blessed Virgin Mary, it goes for the one he called his Father, it goes for the one he called the Paraclete, it goes for the reality of the Church, the reality of the Sacraments, as I said, the reality of all we believe to be real: What is it? and Is it true? The question, “When did deification first appear?” jumps the gun a little  bit, but it is exactly right to ask that question knowing that eventually we have to say what deification is and then we have to ask if what we say it is, is true. I have not yet laid out exactly what deification is, but I have attempted to sketch out the origin of the doctrine of deification. Once we enter the Patristic age with Irenaeus, Clement of Alexandria, Justin Martyr, the doctrine become central to the Church’s understanding the purpose of the Incarnation. And then came the first great challenge to the Church’s doctrine by Arius who denied the full divinity of our Lord. In no small manner it was just this doctrine that carried the day for Orthodoxy through Athanasius whose teaching practically became a slogan at Nicaea:

“for as the Lord, putting on the body, became man, so we men are deified by the Word as being taken to Him through His flesh… For He was made man that we might be made God.”

Later on I will say more about the Fathers who led the Church through the middle way through the other ecumenical councils, but I want to answer one more question that came up last Wednesday. Someone asked another excellent question: whether or not Angels, since they are said by our Lord to behold the face of his Father, are also deified? This is especially important as you can see from what I have said today concerning deification and the Beatific Vision. The answer is no they are not deified. They do behold the face of the Father, as I suppose other creatures in heaven do, albeit angelic nature does not participate in the interior life of God as does human nature. But most important, for any creature to participate, to partake of the divine nature, as we do, requires first that God become, that God assume into his own divine life, the substantial life of that creature. It has happened that God has assumed into his own divine life the life of the creature man, but no other creature, including the elevated, wonderful order of angels. Angelic nature is not this day participating in the very interior life of the Blessed Trinity, but human nature, your human nature received from the Blessed Virgin Mary, really and truly for eternity does participate in the divine nature. So what is it that the Angels behold when they behold the face of the Father? They behold the face of the Father as creature Angels must and only so. But it is our destiny to behold the face of God as deified human beings, to see as closely as we creatures may, to see God through God’s own eyes  — that is our full potential. Well, you might rightly complain, I still have not said much at all about what it means to be deified. I will, I promise you that, but not today. However, I do want to end by showing just how profound and wonder a reality deification is and I will do that by quoting at some length the Anglican author, C. S. Lewis on the matter.

This first quotation is taken from a book probably most of you have read:

“The command Be ye perfect is not idealistic gas. Nor is it a command to do the impossible. He is going to make us into creatures that can obey that command. He said (in the Bible) that we were “gods” and He is going to make good His words. If we let Him—for we can prevent Him, if we choose—He will make the feeblest and filthiest of us into a god or goddess, dazzling, radiant, immortal creature, pulsating all through with such energy and joy and wisdom and love as we cannot now imagine, a bright stainless mirror which reflects back to God perfectly (though, of course, on a smaller scale) His own boundless power and delight and goodness. The process will be long and in parts very painful; but that is what we are in for. Nothing less. He meant what He said.” Mere Christianity 174-175

And I will close with a quote from Lewis’ The Weight of Glory in which he speaks of the ethic that ought to flow from this dogmatic teaching of Holy Mother Church:

“It is a serious thing to live in a society of possible gods and goddesses, to remember that the dullest and most uninteresting person you talk to may one day be a creature which, if you saw it now, you would be strongly tempted to worship.” The Weight of Glory p. 8

St. John 6. 5.When Jesus then lifted up his eyes, and saw a great company come unto him, he saith unto Philip, Whence shall we buy bread, that these may […]