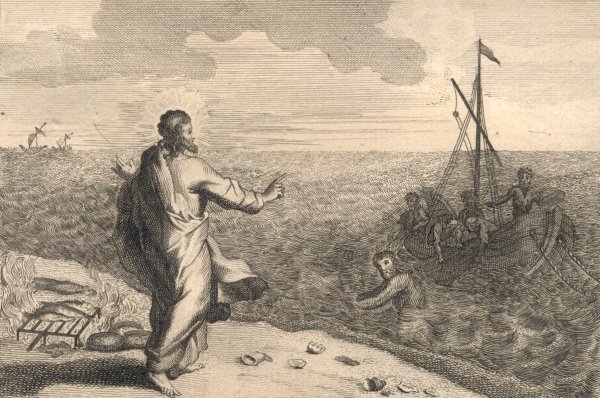 Last week at Bob’s funeral there were numerous references to the resurrection of Christ and our own resurrection. In addition to that Fr. Dan made the point in his sermon that the various offices of the Christian man and woman, that is what we sometimes call duties, are actual means of sacramental grace that form Catholic character. For example the office of the “husband” carries with it duties that are not mere rules or laws performed by rote, but rather, the performance of such duties forms the man more and more into the image of Christ. Well, that’s just dandy so long as we are not, as Christians, living in a fool’s paradise; so long as our belief in the bodily resurrection of Jesus Christ corresponds to reality. If Christ was raised bodily from the dead, then his resurrection has “become the first-fruits of them that slept.” If Christ is raised from the dead, then we too shall be raised bodily from the dead. But if Christ has not been raised bodily from the dead, then we will not be raised and all that good theologizing that Fr. Dan does about sacraments and duty and character is just sound and fury because it doesn’t square with, it doesn’t correspond to reality. St. Paul wrote to the Corinthians:

“If Christ has not been raised, your faith is futile and you are still in your sins. Then those who have fallen asleep in Christ have perished. If for this life only we have hoped in Christ, we are of all men most to be pitied.”

I want you to understand beyond any shadow of doubt that if Christ was not raised bodily from the dead then Christianity is a scam and a deception and we are all great big fools for being here. But as a matter I also want you to understand that Jesus was raised bodily from the dead. However, it isn’t enough that he was in fact raised from the dead because for you to be a Christian that is exactly what you must believe, and if you don’t believe that then with all due respect you are not an authentic Christian. Now I’m not saying that you’re not a sweet person, I’m not saying that God doesn’t love you and I’m not saying that you’re not a patriot and a good American. I’m saying – well, not I – but the Apostle Paul and all the other Apostles and prophets are saying that one is not an authentic Christian – one is not the genuine article, the real thing unless one affirms the historic, physical, bodily resurrection of Jesus Christ from the dead.

It is reasonable to believe that Jesus was raised from the dead, and I want to help you understand why it is reasonable. I can show you why it is intelligent, why it is reasonable, and why it is intellectually and morally responsible to believe the historic accounts in the texts we call the Gospels that report, describe, and narrate the Resurrection of Jesus from the dead. And so that’s what I want to do beginning with this: There are four facts that are reported in the New Testament texts that are undisputed by the majority of biblical scholars who ply their trade in the best universities of Europe and America. Specifically, I can cite Duke University, Notre Dame, Emory, Oxford, Cambridge, Durham, University of Munich, St. Andrews, and Union, just to name a few where some of the very best tenured biblical scholars teach and have agreed that these four facts, reported in the New Testament’s texts, really occurred in history.

What are the four facts? They are all asserted in the little creed that St. Paul presents to the Corinthians in Chapter 15 of his first letter:

The first fact is the burial of Jesus after his horrific death. The second fact is the empty tomb. The third fact is his post-mortem appearances. And the fourth fact is his disciples’ belief in his resurrection.

Now someone will say, “Hey wait a minute there’s no mention of an empty tomb in that little creed.” Yes, you are correct about that but first I want to say something about his burial and then we will look at the empty tomb. After his death Jesus was removed from the cross, wrapped in linen or cotton burial sheets and placed in a tomb that was located quite close to where he died. According to all four Gospels it was Joseph of Arimathaea, a member of the Sanhedrin, who had the courage to ask Pilate to permit him to bury Jesus. Remember that – Joseph of Arimathaea was a member of the Sanhedrin. The Sanhedrin was something like a supreme court; it was made up of seventy men and they presided in Jerusalem. When we see phrases in the Gospels that refer to “the Jews” and especially to the group that opposed Jesus it is a reference to the membership of this group. It would have been on the authority of this group that Stephen was stoned, and it was upon the authority of this group that Saul would have been hunting down Christians before his Damascus Road conversion. It is highly unlikely that the Church would have just made up a story that threw such favorable light upon a member of the very group that sought to destroy Jesus. But it is very likely that in recording the events as they unfolded, the disciples would scrupulously recall such key events and key players whoever they happened to be. So here we end up with the first historic fact: After Jesus’ horrific death, Joseph of Arimathaea quickly buried him in a new tomb close to Calvary.

And three days later that very tomb was empty. Well, what about the empty tomb? Paul never mentions an empty tomb and thus it is not a part this rudimentary creed that he passed on to the Corinthians. But just because it isn’t explicitly stated in this elementary creed, does not mean that people in Israel in the 1st century actually thought you could get away with preaching the resurrection of Jesus from the dead and at the same time have his decomposing body still in the tomb. The easiest and surest way that the Jews or the Romans could put an immediate end to the preaching the resurrection of Jesus would have been for them to drag Jesus’ dead body out of the tomb and put it on display for all to see. But they didn’t do that because there was no body in the tomb. It is the case that the narrative of the empty tomb is probably the earliest of all the resurrection narratives and it is recorded in all four Gospels. The tomb was empty. It is a historic fact. How do you explain it?

The third historic fact is that on different occasion and under various circumstances individual persons and groups of people experienced what they believed to be appearances of Jesus very much alive from the dead. We have no accounts of people who claim to have experienced Jesus as a survivor of his crucifixion. No one describes him as a wounded survivor staggering about Jerusalem. Nor does anyone describe an appearance of Christ as the experience of a spirit or a ghost. What’s more there are several texts that draw attention to the fact that his post-mortem appearances were not of a spirit but of a man of flesh. Resurrected flesh. In the 24th chapter of Luke when our Lord appeared to the disciples in the Upper Room the texts states that:

“They were startled and frightened, and supposed that they saw a spirit. And he said to them, ‘Why are you troubled, and why does questionings rise in your hearts? See my hands and my feet, that it is I myself; handle me, and see; for a spirit has not flesh and bones as you see I have.’”

Furthermore we know from the Gospels of other appearances, both to individuals and to groups. He appeared to Mary Magdalene when she was alone in the garden and according to Luke he appeared to Peter when he was alone. He also appeared to his disciples and Apostles as a group all at once, probably in what we know as the Upper Room. There are two such occasions separated by one seven day week. He also spoke to his disciples face to face and several times by name: Mary in the garden, Thomas in the Upper Room one week after his resurrection; as well as the Beloved Disciple and Peter at some point after that first week. And according to Paul he appeared to over 500 disciples at one time most of whom were still alive when Paul wrote his first letter to the Corinthians. It is obvious that the only reason Paul mentioned the appearance to the 500 was to say to his readers that there are authentic witnesses to be questioned at the present time if you wish. Please also note that there is no way that Paul would have mentioned the event if it had not occurred. It would have been foolish to challenge the Corinthians to question witnesses of an event if the event had not taken place. The Gospel narratives and Paul’s citations provide us with multiple and independent testimony of Jesus’ post-mortem appearances. It is a fact that individuals and even groups of people believed that they had multiple experiences of Jesus very much alive from the dead. What is the best explanation for that fact?

The fourth historic fact is that his disciples suddenly, practically over night, and quite sincerely came to believe that Jesus was raised from the dead even though they were predisposed not to believe any such thing. What made them believe that? The situation of the disciples was that their leader had been horribly put to death by crucifixion. They had such great hope in Jesus, but their hope had been shattered. On top of that, Jewish belief had no concept of resurrection prior to the general resurrection at the end of the world and even that is vague. As far as his disciples were concerned Jesus had been defeated and now they would be lucky to get out of Jerusalem alive. Nevertheless his original band of disciples suddenly came to believe that the man they loved who died such a horrible death on the cross was now alive. Not only was he alive – God raised him from the dead and they were suddenly so sure of its truthfulness that they were quite willing to die for that belief. Of course the big question is, what on earth caused them to believe in such a non-Jewish, bizarre, fantastic, far-fetched thing? How are we to explain these four facts? As one scholar said “Some sort of powerful, transformative experience is required to generate the sort of movement earliest Christianity was.” And according to NT Wright, one of the most astute New Testament scholars living today, “as an historian, I cannot explain the rise of early Christianity, unless Jesus rose again, leaving an empty tomb behind him.”

Well that as far as we get today! There are four facts that most credible biblical scholars all agree on: Jesus died and was buried, his tomb was shortly discovered to be empty, his disciples all believed they experienced post-mortem appearances of Jesus, and something caused his disciples to believe that he was raise from the dead. What is the best explanation for these facts?