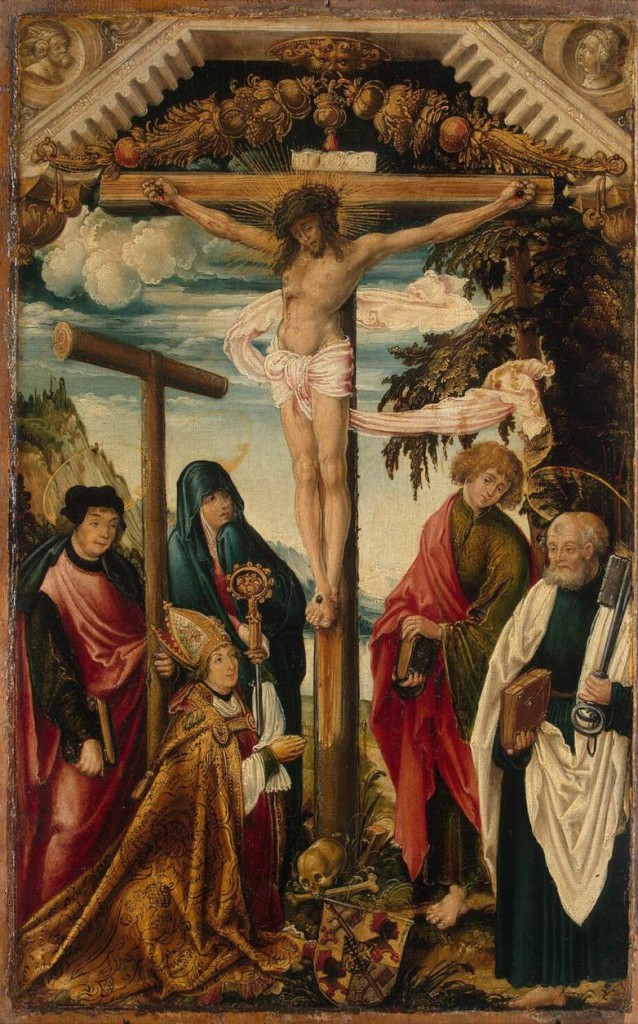 “And when he had scourged Jesus he delivered him to be crucified. Then the soldiers took Jesus… and they stripped him, and put on him a scarlet robe: and when they had platted a crown of thorns they put it upon his head, and a reed in his right hand. And they bowed the knee before him and mocked him saying: Hail, King of the Jews.” Matthew 27: 26-29

The name of Jesus was upon Paul’s lips morning, noon and night. Not one thing in the world was more important to Paul that Jesus. It isn’t that he thought of nothing else but it is rather that everything in the world, that there is a morning, a noon and a night; that there is a real past, a real present, and a very real future — the finality of all creation, the real meaning of every single thing in the whole wide universe is the life story of Jesus the Messiah.

He is the God who is God. But he did not stride through Israel three feet off the ground; nor did the splendor of the Shekinah beam from his holy face. So unimposing was the boy Jesus that in his twelfth year he went missing a whole day before anyone knew it. The next thing we know he showed up on the banks for the Jordon when he was about twenty-eight-years-old and only after John points him out did his first disciples take notice of him. A Samaritan woman drawing water from a well identified him as a Jewish man – and that is all, at first. By simply looking at him you would not have guessed that he could heal the sick with his touch, multiply the loaves and fishes, raise the dead, forgive sin, terrify demons, and enrage the priestly elite of Israel. But he did. The Jews had attempted to take him several times, but he simply walked away and they would not take him until he was ready. When Judas betrayed him in the Garden a band of Roman soldiers accompanied the Jews. Apparently they were expecting a fight. “Whom seek ye?” said Jesus. “Jesus of Nazareth,” they answered. “I am he,” Jesus said. The Bible records that when he spoke the whole lot stepped back and stumbling over one another they fell to the ground. But, by what we call 9:00 a.m., the Roman soldiers had made of him a bloody mess, nailed to wooden beams till he died.

About 26 years later Paul wrote to a Church in Philippi and quoted a hymn they all knew:

The Creator entered into his creation as a creature so that the creature may enter into the uncreated life of the Creator. Paul’s hymn begins with the declaration that Jesus is in and of himself God Almighty.

“Who being in the form of God…”

The word that has been translated “form” is the word Aristotle used to speak of the formal cause, which was a component of the essential nature of a thing. It does not mean form, as in only the appearance of a thing. That Christ was in the form of God does not mean that he is like God, or is similar to God, or that he only appears to be God. No. When the Church of Philippi sang “Who being in the form of God,” they meant that Jesus Christ was in fact God Almighty, the Creator of heaven and earth. The Creator God who formed, who fashioned man in the beginning has formed himself as a creature, not merely in appearance, not like a man, not similar to a man, but True God has become True Man.

The same word is used again in the translation, “the form of a servant. ”

“(Christ) took upon him the form of a servant, and was made in the likeness of men”

This is what it means: Jesus Christ is God and this God became a real human being. He has always been God and he always will be God but has not always been a human being and he became a human being just like all of us: he had a Mother.  In fact he became Mary’s flesh; as sure as you are the flesh of your mother, God became the flesh his His Mother, thus the Church’s august title for Mary is Theotokos: “Mother of God.” As sure as your blood is blood from your mother, so the blood that flowed down the Cross was the blood from the Blessed Virgin Mary. The Word became flesh the same way you and I became flesh. He didn’t disguise himself as a human being. He became one of us; the Creator became a creature, body, blood and all; a real human being, a real man, fragile as any other man and beset by the same human contingencies that beset us all. How fragile? Besides experiencing and communicating hunger, thirst, and weariness, he communicated to his disciples his own private, interior experience of temptation, and ultimately the Roman authorities put him to death. God became flesh, he did not merely animate a piece of flesh to disguise his true identity or speak from behind a mask of human flesh. Furthermore God’s human flesh, his human nature, is now part and parcel of his reality and it always will be. In Genesis we have the narrative of man made in the image of God while in life of Jesus Christ we have the narrative of God made in the image of man. In the story of God’s life made flesh we see not only the uncreated glory of the only begotten Son, but we also see the created glory of his creature man uplifted as God has always intended. The Incarnation was not God’s response to sin; the Incarnation is not God’s backup plan; the Incarnation is God’s perfect will, his loving will to enable his creature man to participate in his divine life, to enable his creature man to know the God who is God and to love the God who is God as his own divinized, his own apotheosized children. That had always been God’s intention and frankly sin did not get in the way of God’s intention to enter his creation as a Creature so that the creature could do the unthinkable: actually, really enter into the uncreated life of the God who is God.

Just prior to Jesus’ arrest in the Garden, after instituting the Blessed Sacrament, he gathered up his men and he prayed:

“Father, I desire that they also…may be with me where I am, to behold my glory which thou hast given me in thy love for me before the foundation of the world.”

Having gathered strength from his Father in the Garden of Gethsemane, Jesus then opened himself up completely to Satan’s final assault. Jesus’ hour had come upon the world.

“And when he had scourged Jesus he delivered him to be crucified. Then the soldiers took Jesus… and they stripped him, and put on him a scarlet robe… And they bowed the knee before him and mocked him saying: Hail, King of the Jews.”

God clothed our first Parents with the skins animals not to cover our shame but rather that we might know from the inside out sin’s finality with regard to creation. There is some folks will profess what they call the felix culpa, the happy fault. There is even a text from the Easter Vigil that declares:

“O happy fault that earned for us so great, so glorious a Redeemer.”

What is implied there and what is not true is that there is a causal relation between original sin and the Incarnation. That is not true. There is nothing good about sin. There is nothing fortunate about he Fall. The Incarnation was God’s plan all along. The uplifting and the deification of man and the bestowal of God’s glory upon man was and always has been the purpose of the Incarnation, and it was his intention before and after the Fall. There is nothing good about sin.  And it was God’s intention that original sin would not get in the way of God’s original intention to make us his very own children by grace. Even though after the Fall it mean his certain death, his death and resurrection would become the First Day of the New Creation. His death would destroy death.

Palm Sunday commemorates the moment of Jesus’ glory, his love and faith in his Father and his unending love for us. After scourging the Shepherd of Love, the Roman soldiers covered God made Flesh with a scarlet robe, the blood soaked banner that proclaimed Jesus’ never failing faith in his Father, and they quickly took Jesus off to Golgotha, a high spot not far away. There they nailed him to the cross. He was placed between two criminals but his cross would have been a bit higher since he was the important person being executed. The crosses of the criminals would have been seven or eight feet high; Jesus’ cross would have been no more than nine or ten feet high. Some of Israel’s priests followed and stood by the cross mocking him:

“If thou be the Son of God come down from the cross and we will believe him.”

We have heard that voice before:

“If thou be the Son of God turn these stones into bread.”

Again the chief priests repeat what we have heard so many times before:

“He saved other, himself he cannot save: if he be the King of Israel, let him now come down from the cross, and we will believe him…”

In the same manner that the serpent offered divinity to Adam his own way, the chief priests became the mouthpiece of Satan offered Jesus the Kingdom without a cross.

The young man who died on the cross is God. He has taken our nature into himself and become one of us – body and all. And he has made us partakers of the Divine nature. He has emptied himself for love of his Father and you. And now you and I are called to empty yourself for love of him and others.