For we know that the whole creation groaneth and travaileth in pain together until now. And not only they, but ourselves also, which have the firstfruits of the Spirit, even we ourselves groan within ourselves, waiting for the adoption, to wit, the redemption of our bodies. Romans viii

I have pointed out in the past that in Genesis man was the very last of God’s creatures created. He was created not out of nothing, like all that came before him, but he was sculpted from dirt and made a living spiritual/material/social being by God’s own hand and breathe. And he was made in the image and likeness of God Himself. Made the Crown of God’s work and given the charge to be a Husband to creation. And that charge remains to this day — to Husband creation, to love, honor, and cherish and to bring her to her full potential. And note that this Office was given man before the Fall. Thus our God-given vocation is associated not with our salvation but with our very meaning and place in God’s order. Our flesh longs to plant gardens, to raise chickens, to gather eggs, to nest, and to go fishing.  Mysteriously we achieve so great a satisfaction from their labors. One slows-down. Husbanding even a small patch of creation we catch ourselves falling in love with it. There is no duality in love, no mere utilitarianism, no mere instrumentalism.

In the Epistle for today St. Paul presents a cosmic vision of liberation that will result in a new earth, a re-created earthy environment that will be fit for God’s restored, resurrected children. We have an image, a revelation of Creation longing for her restored Husband, a vision of the Garden yearning for her Gardener.

I reckon that the sufferings of this present time are not worthy to be compared with the glory which shall be revealed in us.

Paul is not speculating here. He doesn’t mean, “Well, I reckon this may be the case.” The word he used for “reckon” is one of gravity: “It is my settled conviction,” would be better. And it is important to note that his conviction with regard to what he is about to say is not merely the result of rational insight and study of the Gospel, but rather it is a result of his experience of the Holy Spirit. We have a destiny as embodied children of God to live in a new world, and yet there are harsh realities we must live with before the end. The suffering we endure is a mysterious sharing in the suffering of Christ.  Some of that suffering is a result of sin’s wreckage person-to-person and some is a result of sin’s enslavement of creation to death and corruption. But all that pales in comparison to the final transformation of this corporeal existence into a “heavenly” corporeal existence. But please understand that the “heavenly” environment Paul is thinking of is this old world of ours finally transfigured and restored at the Second Coming of Christ.

For we know that the whole creation groaneth and travaileth in pain together until now.

The Psalmist sings of the hills of Zion skipping like rams and he declares that the “rivers shall clap their hands,” and “the meadows are clothed with flocks; they shout for joy, yes, they sing.” Paul returns to the poetry he has learned from the Old Testament to open up the mysteries of our common life in Christ. He personifies the nonhuman creation vividly and caste her as a woman giving birth; full of expectation and hope while awaiting the resurrection of the children of God and the restoration.

For the earnest expectation of the creature waiteth for the manifestation of the sons of God. For the creature was made subject to vanity (futility), not willingly, but by reason of him who hath subjected the same in hope, because the creature itself also shall be delivered from the bondage of corruption into the glorious liberty of the children of God. For we know that the whole creation groaneth and travaileth in pain together until now.

Restoration is poignant because creation continues to suffer an existential bondage to death, which is a state of futility and corruption. The word we have translated “vanity” is better-translated “futility.” Futility is the result of using of an object to achieve an end for which it was not designed. Food is for nourishment, but food may be used to coerce the hungry man, thereby using it to achieve an end for which it was not designed. Man introduced futility into creation with Adam’s distortion of his God-given work to husband creation. “Man the Gardener” became “Man the Exploiter.” The futility to which Adam subjected creation was a result of his attempt to snatch for himself and his own ends what belonged only to God. Thus he drew all of creation into his own waywardness and that spread death and corruption. Still, Paul personifies creation as a bride in labor, waiting in great anticipation, and with great pathos, for the victory of God and the Restoration.

For we know that the whole creation groaneth and travaileth in pain together until now. And not only they, but ourselves also, which have the firstfruits of the Spirit, even we ourselves groan within ourselves, waiting for the adoption, to wit, the redemption of our bodies.

Note that we too wait and groan within ourselves along with creation, as we anticipate the victory of God and the redemption of the material and non-material creation. We wait for the “redemption of our bodies” — we do not look for an eternal vocation apart from our bodies. The material world is not our enemy. Mankind’s relation to the rest of creation is not dualistic. We sigh, we groan together. There is a oneness, a unity, and a sense of belonging — of being-at-home that is like a long ago memory we recall as through a glass darkly. We and creation were made for one another. This sense of oneness with creation is sorely impaired but the longing is profound and we have a Revelation from God affirming the truth of our intuitions. And so Paul gives us a vision of our destiny as children of God that must also include the destiny of this earth — from whose own soil and substance God sculpted our bodies. And from her gardens and rivers and steams; from bird and beast and reptile — a redeemed order will come together as a fit habitat for the children of God. The Gardener, the Last Adam, will return to his Garden with his siblings in tow.

But till then we continue to live in this “Already/Not Yet” tension of hope and loss, of faith and death, of love and broken hearts. The dearest people in our lives leave us eventually or we leave them. Death breaks the circle. And it breaks our hearts. And yet we continue to know the “firstfruits of the Spirit,” a green joy that Paul likens to the firstfruits of a harvest, the first wine of the season, the first grain scattered about the threshing floor. The Holy Spirit succors us with Word and Sacrament and we know that the harvest has begun and the final fruit, the resurrection, is sure to come. But the Holy Spirit does not free us from the tension of living within this veil of tears. In fact the Holy Spirit actually heightens the tension and brings it to an anguished expression as we sigh within waiting not for deliverance from the material world but our transformation and restoration.

We live in the time between the two chief moments in history that will culminate in a new earth filled with God’s own children. The first moment was Pentecost when the Father sent the gift of the Holy Spirit through our resurrected Lord. The one-hundred-and-ten souls in the Upper Room were all born again as children of God and filled with the Holy Spirit that morning. That great action of the Holy Trinity was personalized and effectually applied to your life when you were baptized. You were personally integrated into God’s plan of the ages at that moment. This is what Paul refers to as the “firstfruits of the Spirit,” the beginning of the harvest in which we have personally been included, folded into God’s corporate action that will culminate at the end of history. Groaning and travail mark this time. The earth roars with floods, groans in earthquakes and screams and thunders in storm, lightening and hail. Paul encourages us to personalize this and to realize the solidarity between the whole creation and ourselves:

The whole creation groaneth and travaileth in pain together until now. And not only they, but we also… groan within ourselves, waiting for the adoption, to wit, the redemption of our bodies.

The second great moment will be “the redemption of our bodies,” which is the Restoration of all things. Our bodies like the rest of the material creation will be redeemed from corruption. The whole creation will be made new, made incorruptible. We will live together forever.

Behold I show you a mystery; We shall not all sleep but we shall all be changed, In a moment, in the twinkling of an eye, at the last trump… the dead in Christ shall be raised incorruptible and we shall be changed. So when this corruptible shall have put on incorruption, and this mortal shall have put on immortality, then shall be brought to pass the saying that is written, Death is swallowed up in victory. O death, where is they sting? O grave, where is thy victory? 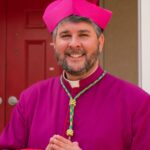 Now about that time Herod the king stretched forth his hands to vex certain of the Church. And he killed James the brother of John wit the sword. And because […]