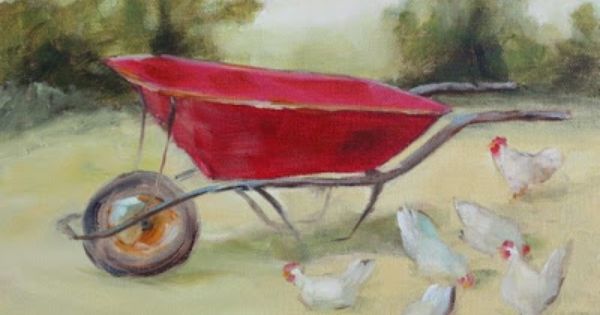 “Jesus said, ‘A certain man had two sons: and the younger of them said to his father, Father, give me the portion of goods that falleth to me. And he divided unto them his living.’”

I want to say a few things about the way we read and understand the literature of the Church and I will begin with a favorite poem. The story of the Prodigal Son always brings to mind William Carlos Williams’ famous poem, A Red Wheelbarrow:

But maybe all that is wrong. Maybe this poem is just a list. A list of thing the poet saw — the color red, a wheelbarrow, rainwater, the color white and chickens. Maybe the “so much depends” is the poet’s list that means nothing more than just a list of impressions. But you know better than that.

You know more in your imagination than a list of things, don’t you? You know what isn’t said. What isn’t said could fill up books! Some of you saw green grass (there’s not a word about green grass in the poem), a blue sky, and clouds; light and maybe some of you even smelled fresh rain. Is something else unseen or unspoken breaking out of William Carlos Williams’ poem?

What if that rain water glazed wheelbarrow of red and chickens all white are more than what they appear to be? What if they are more than a list of impressions; more even that their utility to the farmer or any of us? What if, in simply being what they are, they are full of the splendor of God; a God who values and even loves white chickens and red wheelbarrows? A God whose splendor cannot but “flame out, like shining from shook foil.” What if one man’s list of sensible impressions, in the words of Gerard Manly Hopkins, actually “gathers to a greatness like the ooze of oil. Crushed?” And what if over all these things “smeared with toil” and wearing man’s smudge and smell — what if over all that — bends the Holy Ghost with warm breast and bright wings? I submit to you that we worship a God of smudge and soil, who with his own hands, took hold of the wooden handles of hammers, and chisels and wheelbarrows; a God who could have and probably did gathered eggs from nesting hens. Maybe it is the God we have come to worship this morning who depends so much upon the red wheelbarrow and the white chickens. But God depends on absolutely nothing — that much we know for sure. But a God who depends so much on a red wheelbarrow and white chickens would be a God who has become one of us.

Over the years as I have studied this Gospel, this poem has frequently come to mind — at first I think because of the rural setting of this family’s home. This story begins and ends on a prosperous farm. Wheelbarrows have been around for a long time and since the elder brother is out in the field working away in the hot sun, I supplied him with a wheelbarrow in my imagination before I knew it. Not intentionally — but naturally, in my mind’s eye, I placed it in the scene.

But the poem has nagged me for other reasons: there is no obvious interpretation to this poem and there is certainly no moral. And as I said, I want to say something about how we read and interpret the Church’s Texts, her stories, her memories, her poems and her theology. And you can see from William Carlos Williams’ little poem that interpretation depends very much upon what you bring to the texts.

There was a time when professionals in seminaries approached Scripture by trying to figure out the original intention of the author. I do not think many of them believed that the author of the Bible was in a real manner  God the Holy Spirit, because that would have made some difference. In 1859 Benjamin Jowett, then Regius Professor of Greek in the University of Oxford, published a famous essay on the Interpretation of Scripture. This is what he said: “Scripture has one meaning — the meaning which it had in the mind of the Prophet or Evangelist who first uttered or wrote it.” That is what is called authorial intention and it became the Golden Grail for Jewett and folks back then. (But like I said, they did not mean by “author,” God, but a prophet or evangelist.) But authorial intention is no longer the Golden Grail, the self-evident, inalienable project of biblical studies. Today Biblical Studies in the academy is so all over the place that just about any project that gets funding becomes the Golden Grail at least for a little while. Biblical Studies today may be compared to the thousands of people who pass by All Saints everyday. Driving home from work, as evening falls upon a Wednesday, drivers and passengers see steams of cars winding their way up our driveway to the parish church perched upon a hill, topped off with a cross on the bell tower. Every passerby has a story and each one brings that story to what he or she sees upon the hill.  Every person has an interpretation of what is going on at All Saints on Wednesday nights without actually walking through the door.

This is exactly what Jowett wanted to be rid of: ”The true use of interpretation is to get rid of interpretation, and leave us alone in company with the author.” So there you have it — “me, my Bible, and God.” And we bought it hook-line-and-sinker.

There was another man named John Cassian, born in AD 360, a deep scholar of the Bible and the Church Fathers before him, and he taught his young students that there is a four-fold sense of Scripture. The first sense of Scripture is what he called “the Letter,” which he took from St. Paul’s Second Letter to the Corinthians: “The letter kills but the spirit makes alive.”  “The Letter,” as John Cassian appropriated it, is what we would call the literal sense, the historic sense — authorial intention. But John Cassian, wise man that he was, realized that the original intention might not edify the Church at all. If that is the case there were three other senses that may help the Church appropriate the Scriptures for her children. According to St. Augustine God gave the Church the Scriptures for her edification and cultivation of the three theological virtues. Thus the other three senses of Scripture are drawn from the theological virtues of faith, hope and love. Thomas Aquinas called this the “mystical meaning.” Until the Reformation caste a dark cloud of suspicion over art and narrative and beauty, and until the Enlightenment followed by modern times attempted to reduce truth and meaning to only the authorial sense, the Church nurtured her children on the pure milk of the Word with reference to the theological virtues. And it is a happy work of God today that Holy Mother Church is bringing this old and sometime forgotten treasure out of storage and re-appropriating it for her children.

“Jesus said, ‘A certain man had two sons: and the younger of them said to his father, Father, give me the portion of goods that falleth to me. And he divided unto them his living.’”

The meaning of this story is not exhausted by Jesus’ original intention — which had to do with showing up the Pharisees, represented by the elder brother, who withholds pity and compassion and demands the letter of the Jewish Law. The Church has at her disposal the wisdom of the Holy Spirit and all her children have an anointing, so let us apply the Church’s four-fold sense to this story. The first sense has to do with the original intention that was Jesus’ mission to stand against the Pharisees and the wreckage they made of Israel’s religion.

The second level asks the question: What does this teach us about faith. What does this teach us to believe about God? The loving Father in this parable presents the Church with a symbol of God Almighty himself. His unstinted love. His plentiful mercy. Note that his self-assurance in his forgiveness and his kindness is manifested not only toward his repentant son. He also exhibits the same love and patience toward the elder brother who is the uncomprehending critic of his love. God comes to us offering his love and forgiveness way before we realize we need forgiving. He loves us before we love him or anyone else.

The third Sense of Scripture teaches us what we may hope for. We may hope, that is have sure confidence, that Jesus’ Father will be as loving and merciful to us as this loving Father was to his very different children. He goes to both of them when they are far off. I may expect that God the Father already sees me as I turn little by little his way to begin my trip home. Even when we seem far away from one another, he sees me and he loves me. Can I actually believe that God sees me from afar and as it were would run out to meet me?

The fourth Sense of Scripture teaches us how we ought to live. If I apply this to my behavior right now it means that I ought to not delay coming to God the Father. He loves me before I even realize that he loves me. But it also means that I ought to behave like God the Father. If I am extravagantly loved and welcomed back home by God the Father, I ought to be as loving and as welcoming as he is. And I ought to love the one who judges me for being open, loving and welcoming. The loving Father loved elder brother just as much as the prodigal. Even before the elder brother comprehends his sin, his Father leaves the celebration and cajoles his first born to come in and greet his long lost little brother.

So there you have! And even that is not all there is to it! It is never-ending, vast and boundless as all God’s thoughts are! Our Texts are golden, our Texts are sweet as honey, our Texts are meat and God authored our Texts for us. And we will never exhausts its supply of treasure.