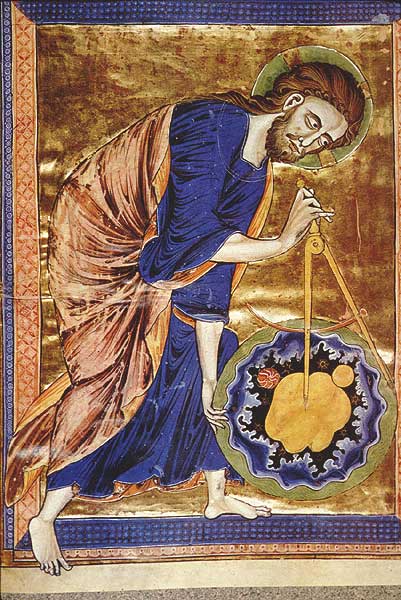 As I said last week, John is putting before his audience the record of a new creation, a second creation. The new creation that John puts before his little parishes is the bringing into being that which was not in the world or heaven before our Lord’s incarnation — specifically the new creation is the bringing into being of the sons, the children of God. Creation is hinted at with the first phrase of the first sentence of his Gospel,

“In the beginning was…”

“That which was from the beginning…”

— Who can read these verses without being drawn back to the first words of Genesis:

“In the beginning God created the heaven and the earth. And the earth was without form, and void; and darkness was upon the face of the deep. And the Spirit of God moved upon the face of the waters. And God said, Let there be light: and there was light. And God saw the light, that it was good: and God divided the light from the darkness. And God called the light Day, and the darkness he called Night. And the evening and the morning were the first day… And God said, Let the waters under the heaven be gathered together unto one place, and let the dry land appear: and it was so. And God called the dry land Earth; and the gathering together of the waters called he Seas: and God saw that it was good.”

God brought forth all things visible and invisible in heaven and on earth. John picks up on the language of Israel’s creation story for the very purpose of communicating to us the new creation in Christ Jesus; which new creation became reality at the incarnation of the Word of the Father.

“And God said, Let there be light: and there was light.”

As I have said many times before at least part of what it means for us to be created in the image and likeness of God is the reality of our own interior and exterior life. But there is also a difference. St. Paul wrote:

“For what person knows a man’s thoughts except the spirit of the man which is in him? So also no one comprehends the thoughts of God except the Spirit of God.” I Corinthians 2: 11

I have said before that I always experience a sense of loneliness when I read this because I know that I am a member of Christ, but I also know that I am yet still in a sense alone within myself. Even though it is a fact that we are members of Christ and “every one members one of another” it is still true that no one can really know me without my willingness and my intentional, active participation in being known by the other person. Of course that is not true for God — God is different — because the Persons of the Trinity are completely open to one another, know one another and love one another perfectly. Furthermore, it is also true that all our hearts and interior desires are an open book to God. He knows me better than I know myself.

But the poignant truth is that we are “every one members one of another” and yet none of us can enter into another person’s interior life no matter how much we love one another, no matter how much we wish to know one another it is simply impossible. This is how we are created; it is not a matter of the sin or the fall, it is a matter of being human, of being a living soul. What is a matter of the sin, what is a matter of sickness is what we have lost: That there was a time when there was no loneliness in the world. Once there was a time when man’s interior life and his exterior life was one and sweet communion with his Creator filled up his life. But that was lost in the fall and now all that remains is God’s divine omnipresence. So yes, God is in my soul by definition, but the knowledge of God’s presence without Christ is the experience of ultimate judgment not of mercy and peace. But the point is that in the beginning there was no loneliness. “In the beginning was the Word and the Word with God” and there was no loneliness in God at all. And in the beginning God shared a communion of love with his creation in which man was known and cherished inside and out by his Creator. But our communion of love with our Creator was lost in the fall and man experienced himself as thrown and alone in the world. This loneliness still lingers till we take our place in Jesus’ narrative.

We spend much of our waking life aware not only of other persons, things, and ideas but we are also aware of  the fact that we are aware of other persons, things, and ideas — an activity that no other creature (other than creatures of intelligence like angels) even have the capacity to participate in. And in addition to that we are aware that the other persons we are aware of are themselves mysterious centers of consciousness who are aware of us. We are in the likeness of God. There will never be another you; nor will there ever be another him, or another her. Furthermore, we persons have some kind of power that enables us, in many cases, to act at least to some degree without the constraint of necessity. This is the likeness of God’s freedom. In light of that, I feel a deep sense of personal responsibility for what I do with my life and I am not alone in having that feeling. With the exception of someone who has a serious psychiatric disorder, most people universally know this sense of personal responsibility.  This is the way we are in the world. This is the way God has made us. This is our interior affirmation of the goodness of creation; our potential “yes” in response to the Father’s “yes” at the end of each act of creation. We hear the Father’s “yes” to his second creation when he declares of Jesus at his baptism: “This is my beloved Son in whom I am well pleased.” Your life story has been caught up into Jesus’ life story (a story that we know pleases God the Father) and you have a role that only you can play, and that is a role that involves your participation in ultimate reality — in light of that reality one  should realize that one can work against reality or one can work with reality which is another way of saying that we human beings are empowered to transform our life stories, to turn life into holy art. This shows our likeness to God’s creative power. We are responsible to transform our biographies into autobiographies. This is the way I take responsibility for my life, by turning my life into a story that I know will please God. And that begins in my interior life as I responsibly work and pray, crafting myself into a living work of God-pleasing art. This will be evident in our interior life as well as our exterior life.

We may, every one of us, learn how to receive one another as Christ has received us, and we may learn how to respect the reality that we are persons with impenetrable interior lives — each one of us is a mysterious, enfleshed center of consciousness, a Person. Furthermore we are also every one of us children of God, the objects of God’s love and God’s new creation; really and truly members one of another because we are members of Christ. We will never grow windows so that we can see into one another’s souls, but we can respect the limits that God has created for our life together and live according to those limits. We can cherish the fact that we have an interior life of potentially sweet communion that each person may share with God in prayer and the sacrament of the altar, which reflects the communion of the Persons of the Trinity. We can learn to truly esteem one another, as the Persons of the Trinity know and love one another perfectly. A human being is an outward and visible sign of grace to the whole wide universe. In the first creation man was created in the image of God. In the new creation God became the image of man and he united our nature to the divine nature. So now quite literally we are outwardly and inwardly signs signifying God. We are the image of God; our interior life of conscious intentionality enables us to understand and to behave responsibly outwardly in our bodies. God has equipped us to love and foster his creation, and that includes one another, to its full potential and thus to achieve our full potential as we behave in accordance with the image of God in which we have all been crafted.