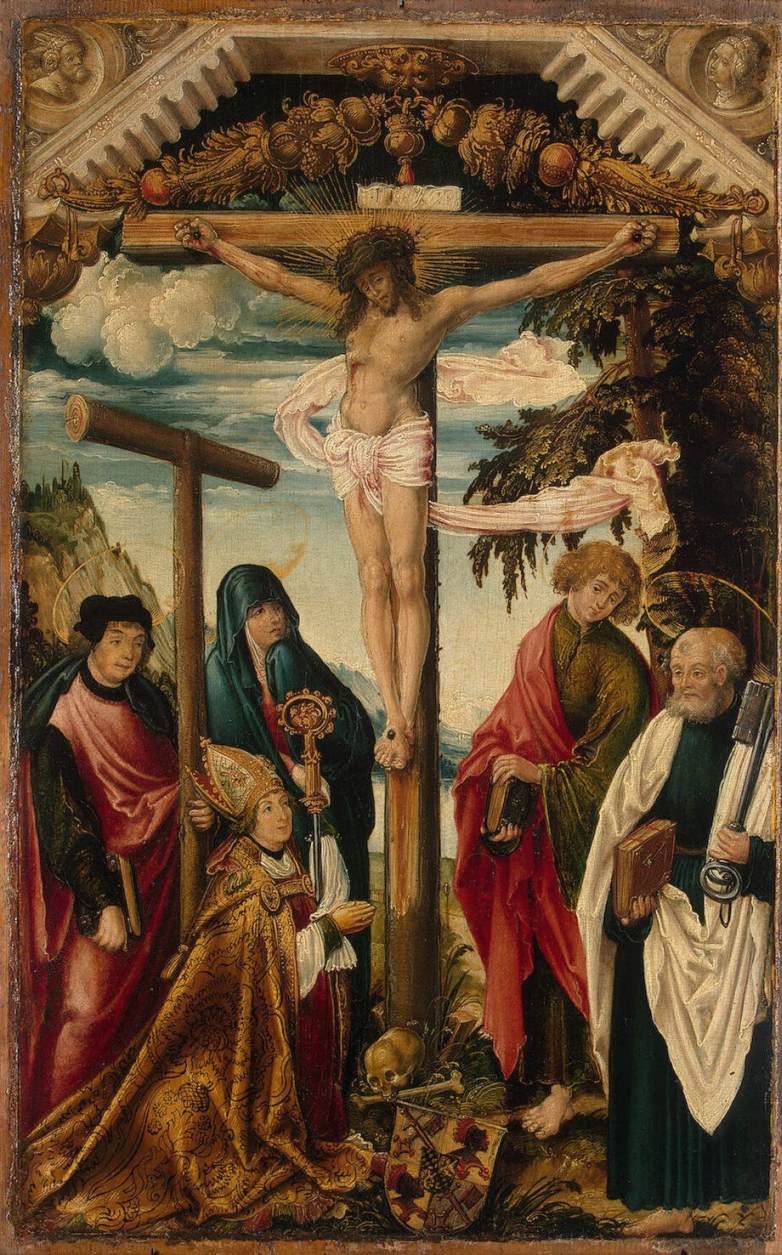 Our preachers have shepherded us from the banks of the Jordon River into Israel’s demon infested wilderness, and then back along the dusty roads of Tyre and Sidon where Jesus gave a pagan mother food meant for Israel. Then somewhere close to Bethany we run into more demonic infestation, the he feeds thousands of Jews near the Sea of Tiberis and then finally on Passion Sunday, last Sunday, we end up back in the Temple in Jerusalem at on which occasion we find Jesus in an intense and angry argument with the Temple authorities over his identity. After all we have witnessed, after all his miracles, his mercy, his love for Israel, the Temple authorities are all the more hardened in their hatred for Jesus.

Our Lord’s performance of miracles attest to the existence of an unseen world that lay all around us. We have learned that Jesus’ particular miracles, in addition to reveling an invisible world, also demonstrate Jesus’ supreme authority over all things seen and unseen as well as his supreme love for us all. And with the Gospel for Passion Sunday we now know the source of his over-arching, matchless jurisdiction in these two worlds. Jesus was a miracle working Jew who performed feats that no other miracle worker in Israel has ever performed. He raised the dead by speaking to the dead person, he gave sight to those born blind, and demons fled in panic at his approach. But what we now know is that performing miracles was not sufficient to win the trust of the people of Israel. From the ruling elite in Jerusalem right down to the day laborer, Jesus showed himself capable of both winning and losing the hearts and minds of the Jewish people. The Gospel for the Saturday after Passion Sunday, yesterday, tells the story of the Chief Priests gathering in Jerusalem plan Lazarus’ death after Jesus had raised him. Experiencing real miracles, even someone being raised from the dead, is not a guarantee that the miracle worker has the right, the standing, the authority to do the kind of things Jesus was doing in Israel. He worked miracles and cast out demons — yes. But he also forgave sin, not in the Name of God, but in his own right. He did away with some of the most basic laws of Israel that Jews took to be the most important markers of their identity as children of Abraham. He gave the food of the children to those the children considered dogs. The question boils down to his identity. Who is Jesus of Nazareth? At the end of the Gospel for Passion Sunday Jesus makes his identity perfectly clear:

“Jesus said to them, “Truly, truly, I say to you, before Abraham was, I am.” So they picked up stones to throw at him, but Jesus hid himself and went out of the temple.”

After Jesus raised Lazarus from the dead he went to Jerusalem for the Passover and when the people discovered that he was there they went out to meet him with palms crying out “Blessed is the King of Israel, that cometh in the name of the Lord!”

The ruling elite in Jerusalem had attempted to take him several times, but he simply walked away. They couldn’t lay a hand upon him; they would not take him until he was ready. That Passover, the one where they waved the palm branches, he was ready. When Judas betrayed him in the Garden a band of Roman soldiers accompanied the Jews to formally arrest him. Apparently they were expecting a fight. “Whom seek ye?” said Jesus. “Jesus of Nazareth,” they answered. “I am he,” Jesus said. The Bible records that when he spoke the whole lot stepped back and stumbling over one another they fell to the ground. Before the night was over the Temple authorities would hand him over to the Romans. Caesar will take custody of the enfleshed God of Abraham, Issac, and Jacob. Listen to me: by what we call 9:00 a.m., Caesar’s soldiers had made of him a bloody mess, tortured, scourged nearly to death and then nailed to wooden beams till he did died. That bloody mess of a man is the God who is God, the King of the Universe rules from the Tree of the Cross. Twenty-six years later St. Paul wrote to the Christians of Philippi and he quoted what was probably a popular hymn in their Liturgy:

The Creator entered into his creation as a creature so that the creature may enter into the uncreated life of the Creator. Paul’s hymn begins with the declaration that Jesus is in and of himself God Almighty.

“Who being in the form of God…”

The word that has been translated “form” is the word Aristotle used to speak of the formal cause, which was a component of the essential nature of a thing. It does not mean form, as in only the appearance of a thing. That Christ was in the form of God does not mean that he is like God, or is similar to God, or that he only appears to be God. No. When the Church of Philippi sang “Who being in the form of God,” they meant that Jesus Christ was in fact God Almighty, the Creator of heaven and earth. Furthermore the Creator God who formed, who fashioned man in the beginning, has assumed the creature man into his divine life, not merely in appearance, not like a man, not similar to a man, but True God has become True Man. The same word is used again in the translation, “the form of a servant. ”

“(Christ) took upon him the form of a servant, and was made in the likeness of men”

This is what it means: Jesus Christ is God and this God became a real human being. He has always been God and he always will be God. But he has not always been a human being and he became a human being just like all of us: he had a Mother. In fact he became Mary’s flesh; as sure as you are the flesh of your mother, God became the flesh his His Mother, thus the Church’s august title for Mary is Theotokos: “Mother of God.” As sure as your blood is blood from your mother, so the blood that flowed down the Cross was the blood from the Blessed Virgin Mary. The Word became flesh the same way you and I became flesh, not by fiat, but by a woman who is one of us. He didn’t disguise himself as a human being. He became one of us; the Creator became a creature, body, blood and all; a real human being, a real man, fragile as any other man and beset by the same human contingencies that beset us all. How fragile? Besides experiencing and communicating hunger, thirst, and weariness, he communicated to his disciples his own private, interior experience of temptation, and ultimately the Roman authorities put him to death. God became flesh, he did not merely animate a piece of flesh to disguise his true identity or speak from behind a mask of human flesh. Furthermore God’s human flesh, his human nature, is now part and parcel of his Divine reality, of his Divine life and it always will be. In Genesis we have the narrative of man made in the image of God while in life of Jesus Christ we have the narrative of God made in the image of man. In the story of God’s life made flesh we see not only the uncreated glory of the only begotten Son, but we also see the created glory of his creature man uplifted as God has always intended. The Incarnation was not merely God’s response to sin; the Incarnation is not God’s backup plan; the Incarnation is God’s perfect will, his loving will to enable his creature man to participate in his Divine life, to enable his creature man to know the God who is God and to love the God who is God as his own divinized, his own apotheosized children. That had always been God’s intention and frankly sin did not get in the way of God’s intention to enter his creation as a creature so that the creature could do the unthinkable: actually, really enter into the uncreated life of the God who is God.

Just prior to Jesus’ arrest in the Garden, after instituting the Blessed Sacrament, he gathered up his men and he prayed:

Having gathered strength from his Father in the Garden of Gethsemane, Jesus then opened himself up completely to Satan’s final assault. This is sickening. And this is love. Jesus suffered as no man can possible suffer. He suffered as true God who knows with exquisite perfection each lash across his back, each blow to his head, and iron nail driven into his hands and feet. Because he was true God his agony, his experience of pain is simply beyond our horizon to comprehend. And so is his love for us.

“And when he had scourged Jesus he delivered him to be crucified. Then the soldiers took Jesus… and they stripped him, and put on him a scarlet robe… And they bowed the knee before him and mocked him saying: Hail, King of the Jews.”

God clothed our first Parents with the skins animals not to cover our shame but rather that we might know from the inside out sin’s finality with regard to creation. There is nothing good about sin. And God would not permit sin get in the way of his original intention to make us his very own children by the grace of baptism.

Palm Sunday commemorates the moment of Jesus’ glory, his love and faith in his Father and his unending love for us. After scourging the Shepherd of Love, the Roman soldiers covered God made Flesh with a scarlet robe, the blood soaked banner that proclaimed Jesus’ never failing faith in his Father, and they quickly took him off to Golgotha, a high spot not far away. There they nailed him to the cross. He was placed between two criminals but his cross would have been a bit higher since he was the important person being executed. The crosses of the criminals would have been seven or eight feet high; Jesus’ cross would have been no more than nine or ten feet high. And that is where he died of his own free will and there his body of flesh became the place of judgement and the place of blessing for the whole wide world. That young man, whose flesh is the place of judgement and blessing, is God. He has taken our nature into himself and become one of us — body and all — forever. He has made us partakers of the Divine nature. He has emptied himself for love of his Father and you. And now you and I are called to empty ourselves for love of him and others.