“Neither pray I for these alone, but for them also which shall believe on me through their word; That they all may be one; as thou, Father, art in me, and I in thee, that they also may be one in us”

What I would like to do this morning is to give you a short report of our unity synod, but first I want to recall that our Lord’s prayer — “That they all may be one” — is not the goal of our ecumenical endeavors, but rather it is the foundation of our ecumenical endeavors. Our Lord placed this petition before his Father, in front of all his Apostles, literally just before his arrest in the Garden of Gethsemane. If the Church could have actually attain this sort of unity, this Unity of Love, he would have addressed the Church. But he addressed his Father because only the Father could infuse the Church with the Unity of Love eternally shared among the three Persons of the Blessed Trinity. The Unity of Love is equivalent to the sacramental life of the Church, our sacramental life is the outward and visible evidence of the mystery of Love. Unity of Love is infused into each Christian at his baptism and nurtured through the Holy Communion, as well as preaching, teaching, and as we appropriate the other sacraments in the Household of God, the Body of Christ, the Holy Catholic Church. Unity of Love is not a matter of feelings or solely a matter of deeds though certainly deeds of love and feelings of devotion are frequent outward and visible signs of this Unity. Apostolic Order and fidelity to Apostolic teaching are indispensable signs and symbols and badges signifying the presence of the Unity of Love. This sacramental reality is what Christ prayed his Father to infuse into his disciples and so he did.

So this week the laity, the bishops, the priests and the deacons of theAnglican Provience of America, The Anglican Catholic Church, the Anglican Church in American, and the Diocese of the Holy Cross were enabled by Christ’s gift of Unity. We prayed together each morning, sometimes celebrating the Holy Communion and singing hymns of praise. Then we all went to our separate synods and in the evening we came back together and said Evening Prayer, again singing hymns and psalms and canticles together. During breaks and in the evenings we mingled, renewing old relationships and initiating new friendships — Corey French, now Fr. Corey was there with his ACC bishop; Richard Tarsitano, the son of my old friend Louis Tarsitano, was there with his ACC bishop. The last time I saw Richard he was a teenager and his father was dying and this week I met Fr. Richard Tarsitano and his wife and little child and I had the great pleasure of introducing Mark Perkins, Fr. Corey and Fr. Sean to Fr. Richard. Bishop Iker, of the Diocese of Fort Worth was there as well. He is the bishop who ordained Fr. Bryan Steward, another All Saint’s priest. There were a lot of bishops and I wondered if we really need that many bishops, but to be fair there were bishops from all over the world. Friday morning the Unity Mass was celebrated, the bishop vested all in purple. You know why? Not because it is the color of royalty or because it was a purple season, but because it is the color signifying repentance — repentance for our sad divisions over the years. How richly symbolic and right that the four presiding bishops, as well as the suffragan bishops, celebrated the Sacrament of Unity and Love covering themselves with violet chasubles. There were probably 700 people present who received the sacrament Friday morning:

“Neither pray I for these alone, but for them also which shall believe on me through their word; That they all may be one; as thou, Father, art in me, and I in thee, that they also may be one in us…”

The Unity Mass did not initiate a single, organic jurisdiction, but rather our Bishops, our Shepherds, recognize and celebrated in one another and in their jurisdictions that gift of Christ, the Unity of Apostolic Love, he prayed the Father to bestow upon his disciples. Organic union, a single jurisdiction, may come about one day, but the best, the greater gift of complete sacramental union and fellowship is here and the bishop have thrown wide open the windows and the doors of this synod as an expression of our deep and repentant desire to share this Union of Love with all orthodox Anglicans around the world.

Our Ordinary, Bishop Grundorf, was the unanimous choice of the other bishops to deliver the final sermon. He quoted that great Flannery O’Connor statement: “Know the truth and the truth shall make you odd.” His point was that what we value in the Church turns this culture’s values upside down. Outrageously, we claim to hear the Word of God spoken out loud when the Bible is read. We rejoice to eat the flesh and drink the blood of Jesus Christ, God incarnate, who in fact is not all eaten up, but seated upon the throne of the universe. He is our whole life. Our bishops ordinary put on purple and publicly repent. They publicly gave way to one another. One very old and somewhat feeble bishop celebrated and at time he was held up by his younger friends. Bp. Mark Haverland, the presiding bishop of the ACC, served as the deacon of the Mass — not even a priest. After Lord’s Prayer the bishops shared the kiss of peace with one another before their laity.

Another point Bp Grundorf made was that our four jurisdictions here in America are in fact towered over by our Churches through out the world. There were present bishops from South Africa, Pakistan, Congo, Rowanda, Uganda, and Columbia. Our mission report given in our synod high lighted our interest in India, Haiti, the Philippines, and now what is now legally known as the Indigenous Pastoral of the Anglican Province of America in Ecuador.

I want to end by telling you a story, a true story. There are thirty-three communities in which live over 20,000 Kechwa people of Ecuador. And more communities are coming to us. We are partners with a mission organization called Worthy Endeavors which has a partnership with Samaritans Purse. Worthy Endeavors is working to raise the Kechwa people to a sustainable way of life. They have nothing. They were slaves to the Hasienda system for hundreds of years and they were not freed until 1962. They have nothing except the land they received from the government when they were emancipated.

What the Kechwa people want from us is the Apostolic ministry in the form of bishops, priests, and deacons. They are poor beyond our imagination, but they are devoted to Christ and his Church and they know the Pearl of Great Price. They built their own parish churches after their emancipation, but they were never given priests to serve. They had to travel great distances to have their children baptized or to make their communion. When one of their priest, Fr. Robert Tuaze, requested the use one of the church they had build for an Anglican mass they were turned down. When Fr. Robert met with the community and explained to them that they had no place to meet and he simply did not know what to do. He was serving seven Kechwa communities as their iterate priests and celebrating in the open air as frequently as he could. As Fr. Robert spoke to the people an elderly widow made her way through the crowd and stood in front of him. She then presented him with her wooden spoon and told him that her wooden spoon was her contribution toward a new parish church for their community. In the Kechwa culture a women’s wooden spoon is a critical and prized possession because it is used as her primary cooking utensil. For a widow in the Kechwa culture to give up her wooden spoon is equivalent to giving up all that she possesses. That is pretty close to our Lord’s parable of the Widow’s Mite. But the Kechwa widow’s gift called forth grace: other families stepped forward and promised land and others pledged a bag of cement, or a few bricks, and other a little sand. When Bp. Jones visited with them in August they took him to their new church. The walls are up, but they have no floor nor do they have a roof. But they have their own clergy for the first time in the life of the people. The APA is training their clergy through Trinity’s Spanish language Anglican studies program And soon we will be helping them publish their very own Spanish language BCP with a title page that reads The Book of Common Prayer for Indigenous Pastoral of the Anglican Province of America in Ecuador.

“Neither pray I for these alone, but for them also which shall believe on me through their word; That they all may be one; as thou, Father, art in me, and I in thee, that they also may be one in us”

The Indigenous People of Ecuador understand far better than most of us that the Unity of Love is the gift of God. And I submit to you that the Kechwa people are a gift of God to us. And not them only, but all our true brothers and sister, with whom we share a common life in Christ, a Common Prayer, and a Union of Love, Christ’s gift from his Father. 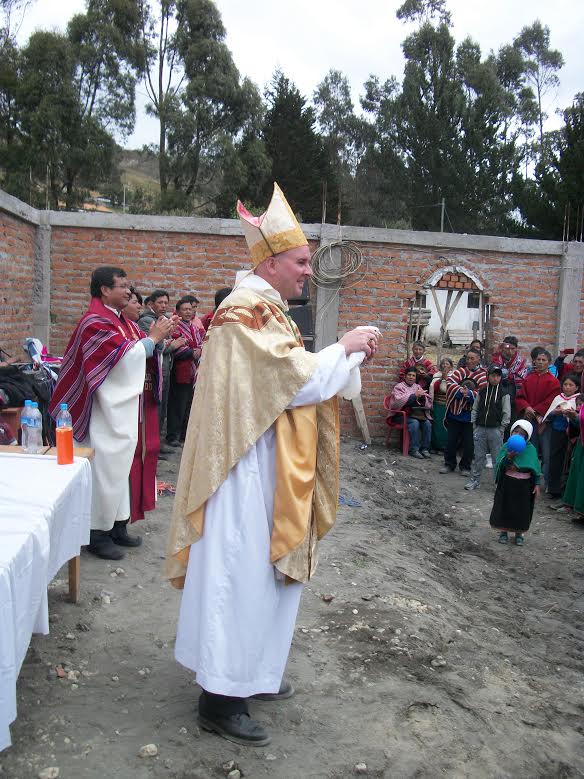