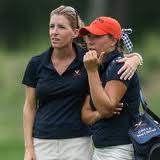 Daytona Beach, FL – The Ladies Professional Golf Association (LPGA) Teaching and Club Professional (T&CP) membership today named Virginia women’s golf coach Kim Lewellen as its National Coach of the Year. The organization also announced its professional and teacher of the year today.Earlier this year Lewellen, who is in her fifth year at Virginia, was named the organization’s Northeast Section Coach of the Year for the second consecutive season

Last season Lewellen led Virginia to a fourth-place finish at the NCAA Championships. It was the best finish by a Cavalier team in the program’s eight-year history. The Cavaliers won the Golfweek Conference Challenge and finished third at the NCAA West Regional.

“I am extremely honored by this award and thankful to be involved in the LPGA,” Lewellen said. “This award is especially meaningful because it is voted on by my colleagues. I would not have had this opportunity without the support of the University of Virginia and the wonderful student-athletes that I am privileged to coach. These young ladies inspire me.”

The LPGA T&CP Coach of the Year award was established in 1980 and is awarded annually to a female golf professional actively engaged in teaching and/or coaching golf at the collegiate or high school level. The award winners were selected by the LPGA T&CP membership’s Executive Committee from the pool of sectional award winners voted on by the members of the five regional sections: Central, Midwest, Northeast, Southeast and Western.

The LPGA Teaching and Club Professional (T&CP) membership, founded in 1959, boasts the largest membership of women golf professionals in the world. LPGA T&CP members are certified as golf instructors, coaches and business managers through a comprehensive curriculum designed to meet the changing needs of the golfing public.