Why does the priest have his back to the congregation? In short: because we are not worshipping one another; nor is worship a personal encounter with one’s neighbor. Worship is bowing down to God; knowing him to be God and knowing our selves not to be God and being grateful. The celebrant is leading the congregation, as a band of brothers and sisters, before the Throne of Grace. On behalf of the congregation and himself, the priest offers up “our selves, our souls and bodies, to be a reasonable, holy and living sacrifice” to God. We many become one sacrifice offered up to God. Geoffrey Wainwright, citing Cardinal Joseph Ratzinger, before he became Pope Benedict, says that Ratzinger was deeply disappointed with the post-Vatican II decision to have the priest celebrating the Liturgy “towards the people.”  Then Cardinal Ratzinger cited Joseph Jungmann and Louis Bouyer “for the view that the important thing, traditionally and theologically, was that the priest and the entire congregation be facing in the same direction, knowing that together they were in procession toward the Lord. They did not close themselves into a circle; they did not gaze at one another; but as the pilgrim people of God they set off for the Oriens, for the Christ who comes to meet us.” 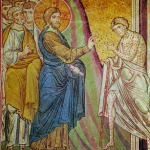 AND it came to pass, as Jesus went to Jerusalem, that he passed through the midst of Samaria and Galilee.  And as he entered into a certain village, there met […]