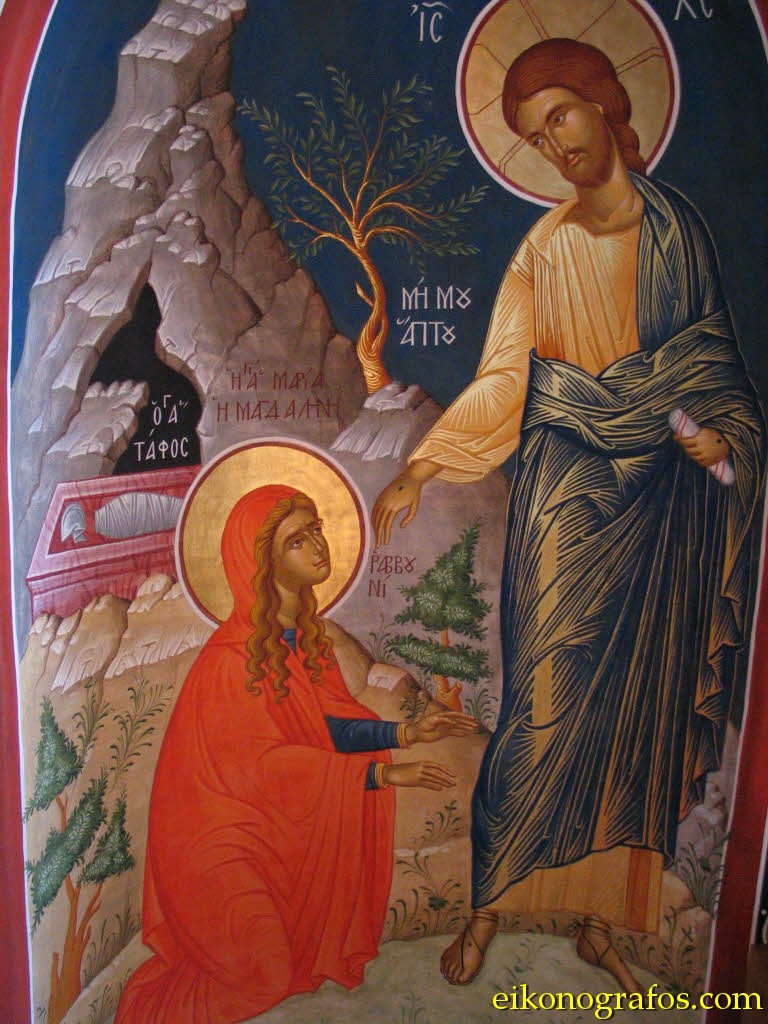 No Gospel outdoes John’s Gospel for literary splendor and visual sumptuousness that leads, indeed lures us, into mystical levels of interpretation. I have pointed out many times that there is a connection of imagery between the Ark of the Covenant, the Empty Tomb, and the Altar. Remember? Atop the Ark of the Covenant were two angels, one on each end directing one’s gaze to the lid of the Ark. That lid was known as the Mercy Seat. On Yom Kippur, the Day of Atonement, a Jewish Priest would enter into the Holy of Holies and sprinkle the blood of the sacrifice upon the Mercy Seat, thus atoning for Israel’s sins. In the Empty Tomb, Mary saw two angels, one seated where Christ’s head had been and the other angel seated where Christ’s feet had been. Jews would understand the image: Mary had come upon another Mercy Seat, but even more than that because the Mercy Seat of the Empty tomb, where the blood of the Jesus had been sprinkled, assumed, subsumed, into its reality the Mercy Seat of the Old Testament. Thus the Mercy Seat of the Empty Tomb bestows final meaning to the Mercy Seat of the Old Testament. But there is more: The Bible says that God “maketh his angels spirits, and his ministers a flame of fire.” Thus the candles upon the altar remind us of the angels upon the Mercy Seat as well as the angels at the Tomb of our risen Lord. In front of you there is another Mercy Seat, the Altar of God, that gathers up and subsumes, sublates both the Mercy Seat of the Old Testament and the Mercy Seat of the Empty Tomb — bring them into perfect unity. That perfection is made visible upon the altar at every mass that the Children of God may participate in that Perfection, which Perfection is the Incarnate Word. And now the Icons of Mary, Mother of God — the Rose Tree of Israel breaks into blossom — and John the Baptist, the Terrestrial Angel, together direct our attention to the place where Bridegroom appears to his Bride at every Mass. How splendid is that? That interpretation is really true and such interpretation depend upon grasping the sacred mysteries in Biblical imagery and allegory.

But that meaning, truthful as it is, is true because it emerges from what the Church Fathers called the “Letter,” or what we would call the literal, historical meaning. If Jesus was not really and truly, bodily, raised from the dead at a specific time (on the third day of his burial) and a specific place (a new tomb close to Calvary) and if he did not then appeared and speak to his disciples — well then all the imagery and allegory in the world is worthless.    So today it is my intention to open up the Letter and elaborate what happened to Jesus on the third day after he died. The point is that what we call the “Resurrection” is something that happened to Jesus. I run the risk of sounding like I am stating the obvious — but not really. The resurrection of Christ is not a poetic way of saying that his disciples were not defeated by his death. It is not the case that shortly after his mangled, dead body was placed in the tomb that his disciples remembered his teaching about God attending to dying birds and flowering lilies and suddenly they developed a positive mental attitude. That did not happen. They were transformed — yes. But their transformation was a response to the very real resurrection of Jesus from the dead.   Before we look at what happened that day permit me to tell you about something I experienced this week. I visited with Fr. Dan to see a painting he has been working on. I know something of the subject and of symbolism art and literature to have a grasp of the narrative that is unfolding on his canvas. There is a man with a red bowtie standing on the driver’s side of a yellow cadillac holding a martini. A Gatsby figure. That is what I thought I saw. But then Fr. Dan said something about the door of the caddy and how happy he was with the door. (You know how artist are. And it is a great door!) But when I turned back to the man there was no martini in his hand. In fact he was holding a black Polaroid camera. What I thought was so vivid was not in the painting at all. My own private illusion had quickly flashed upon the canvas completing a narrative I brought to the painting. What is my point? Skeptics have frequently explained Mary Magdalene’s experience of the risen Christ as her private illusion and they have frequently asserted the same for the other disciples. Their so-called experience of a risen Christ was nothing more than a private illusions completing a narrative they brought with them to the event of his death and their bereavement. But lets look at the texts.   Jesus suffered a savage scourging and crucifixion and he died about 3:00 p.m. on a Friday. Joseph of Arimathea and Nicodemus wrapped his body in clean linen cloths and they wrapped his face with a sudarium, what our text calls a “napkin.” They put his body in Joseph’s new tomb which was in a garden close to Calvary. The women who loved Jesus watched all this at a short distance. While that was happening, Pilate, at the Pharisee’s request, dispatched a guard of Roman soldiers, around 16 men, to establish a chain of custody for the body of Jesus. It was the “koustodia,” the Roman Guard, that officially sealed the tomb thus establishing Caesar’s custody over the lifeless body of Christ. All that was accomplished before sunset on Friday.

Early on the third day of his burial before sunrise, Mary Magdalene and other women went to the tomb in order to complete a proper Jewish burial. When they arrived the stone was rolled away. The Romans were gone. Mary, probably assuming that the Romans had taken the body, ran to Peter and the other disciples who were likely staying in the rented room in which Jesus, on Thursday night, had instituted the Eucharist. Peter and John ran to the tomb. John beat Peter to the tomb but he waited for Peter to enter first. Astonishingly the grave cloths were there on the stone slab where Jesus was laid. And the sudarium, the head covering was there as well, but it was rolled up neatly by itself.

“Then went in also that other disciple, which came first to the sepulchre, and he saw, and believed. For as yet they knew not the scripture, that he must rise again from the dead.”