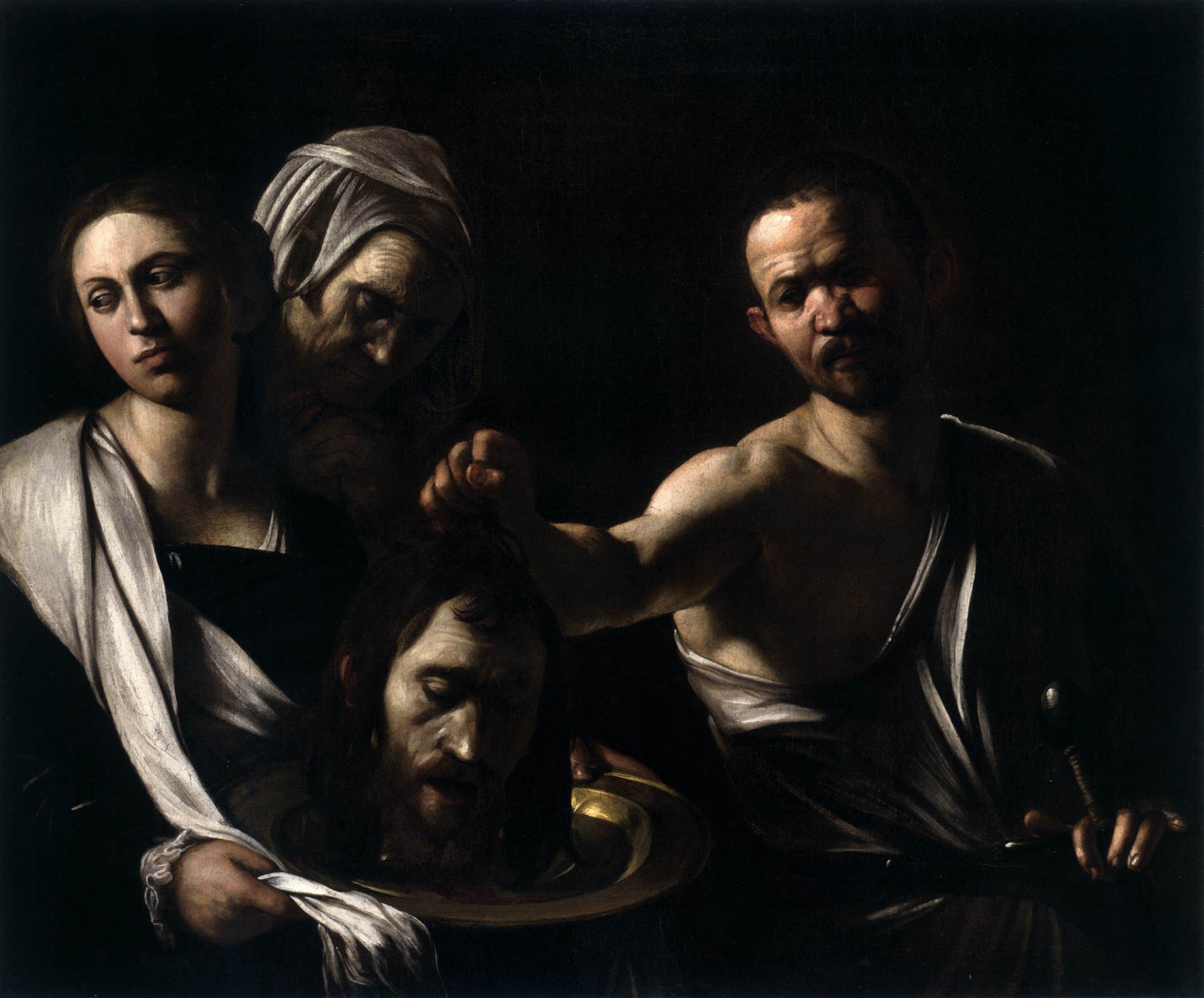 “Now when John had heard in prison the works of Christ, he sent two of his disciples, and said unto him, Art thou he that should come, or do we look for another?”

This is disturbing, especially if one passes over to the point-of-view of the Baptist. John was in prison and he must have known that he would not get out alive. Herod was not as anxious over the opinion of the common folk as were the Pharisees, who were careful not to voice criticism of John the Baptist for fear of falling out of their favor. Herod Antipas was close to twenty-years-old when his father, Herod the Great, had every male child, two-years-old and younger, killed in Bethlehelm. The Herodian Dynasty was homicidal and pitiless and characterized by paranoia. For example, it was well known that Herod the Great had killed two of his own sons for fear that they would attempt to usurp his throne. Even the pagans had a saying: “It is better to be Herod’s pig than his son.” John the Baptist was a realist and it was certain that his work as a prophet of God was about to come to an end. John had not been the sort of prophet who softened the truth for anyone and so on the cusp of his death he sent this message to Jesus:

“Art thou he that should come, or do we look for another?”

“…he who is coming after me is mightier than I, who shoes I am not worthy to carry; he will baptize you with the Holy Ghost and with fire…”

So a year or so later, when John sent two of his disciples to ask Jesus if he is “the one who is to come,” we get hold of a different perspective on the Baptist. And it is an awkward perspective, an embarrassment to the Church because John had begun to doubt that Jesus is the Messiah. This brings us to one of first points I want to make: it is for this very reason that you can be sure the Church did not make up John’s crisis of faith. Why? The Church had nothing to gain by inventing this crisis – what we have here is another piece of textual evidence that shows that the New Testament is a reliable and truthful narrative of all that Jesus said and did. This is the first point I want you to take away from John’s crisis: this account’s embarrassing honesty is a mark of the Church’s devotion to the truth and it is evidence that this really happened. There really was a man named Jesus and John the Baptist thought this man named Jesus was the Messiah, but at the very end of his life, John doubted whether or not that was true.

But given that this account of John’s very personal crisis is true, what does it mean? It is likely that Matthew’s intended audience would not have been nearly as troubled over John’s experience of discouragement and doubt than are most modern readers. We can try to identify what had pushed John over into this experience of doubt and discouragement, but to be exact we will have to state simply that we can say more about the doubt than we can about its causation. The doubt had specifically to do with the identity of Jesus: “are you he who is to come or shall we look for another?” Are you the Messiah or not? That is as profound a crisis as any Christian can experience – is Jesus who we believe him to be or not? But as I have already said, Matthew’s audience would not have been as troubled as most readers are today and the reason for that is because his audience was a biblically literate community – and that is far more rare in our day. A community nurtured on the Bible knows that only God is God and even some of the best, the godliest saints have known profound discouragement and doubt and have acted out in self-will.

Take, for example Elijah, the great prophet of God, who later on in this chapter of the Gospel, Jesus identified specifically with John the Baptist even as he is prison awaiting certain death:

“For all the prophets and the law prophesied until John; and if you are willing to accept it, he is Elijah who is to come…”

Now for a moment pretend that you were a little child standing there with Jesus and let’s say that your parents had made sure that you attended Vacation Bible School and Sabbath School or Wednesday School where you heard Old Testament Bible stories over and over again. Your parents had a goal for you to be biblically literate. Even a little child, who stood there with Jesus and heard this question coming from John, may well have thought of Elijah. Even as a little child you might have recalled how Elijah had once behaved very much like John the Baptist with his question.

Elijah was probably the greatest of the prophets. Remember how he single handedly defeated 450 prophets of Baal on Mount Carmel? They called on Baal, but Baal never answered them. Remember how Elijah even made fun of their little god, Baal, when they were unable to perform even one miracle: “apparently Baal has developed a hearing problem; or maybe Baal has fallen asleep; or maybe Baal has even gone on vacation without telling you.” The prophets of Baal were incapable of producing one single miracle that day on Mount Carmel. But Elijah called on his God, the One Jesus called Father, and Jesus’ Father heard him and sent down fire from heaven to devour not only the sacrifice but also the altar Elijah had set up to worship his God. Elijah was the greatest prophet in the Old Testament.

But you would also remember that even that great unmistakable miracle on Mount Carmel did not get rid Israel of idolatry and Elijah became very discouraged. And then Queen Jezebel sent men to hunt him down to kill him and Elijah became so discouraged and fearful of Jezebel that he ran off into the desert and sat down under a juniper tree and asked God just take his life. And then God sent an angel to feed him and after Elijah ate had enough strength to go forty days and forty nights without eating. You know what Elijah did next? He used that strength to find a cave where he hid from Jezebel and he refused to leave the cave so God came to him and said, “What are you doing here in this cave Elijah?” Now all the children who had been to Vacation Bible School and Wednesday School know how this story ends, so I am going to stop there. But if by chance one does not know how it ends you can find it in I Kings 19.

Someone else among Matthew’s audience might have recalled Jeremiah whose whole work as a prophet of God was announcing the sins of the people and explaining why Israel was about to be destroyed by the Babylonians. God’s personal message to Jeremiah was “Attack you they will, but over come you they cannot.” Jeremiah was despised in Israel, beaten, put into stocks by a priest and false prophet, thrown into a cistern, and imprisoned by the king. Jeremiah grew so discouraged that he cursed the day he was born and every single person connected with his birth.

And then there was David. One time when David was hunted and hounded by Saul and his army, he became so frustrated by all the obstacles to God’s promises that he nearly committed an act that would have fouled the rest of his career in Israel. He took 400 of his men and he was on his way to kill every man associated with this fellow named Nabal who had shown disrespect and refused to give him men any food. Had it not been for a wise woman, Abigail, whom God used to intercede, David, in his anger and haste he would have shed innocent blood.

What is my point? My point is that Matthew did not record John’s struggles with doubt in order to condemn John, but rather to encourage future disciples whose faith would also be tested by hardship, doubt, distress and disappointments.

Furthermore, the early Church shared this perspective because these early Christians were biblically literate and that provided them with a narrative they held in common with Jesus and his disciples. That narrative came from the Old Testament. St. Paul in one of the most inspiring and beautiful passages from 2nd Corinthians summarized this biblical perspective this way:

“But we have this treasure in earthen vessels, to show that the transcendent power belongs to God and not to us. We are afflicted in every way, but not crushed; perplexed, but not driven to despair; persecuted, but not forsaken; struck down, but not destroyed; always carrying in the body the death of Jesus, so that the life of Jesus may also be manifested in our bodies.”

John the Baptist was as weighty and prominent a servant of God as we can find in the whole Bible. Right in the middle of the Prologue of the Gospel of John, which is all about the Word made Flesh, we are told about John the Baptist and his role in the history of salvation:

Jesus told John’s disciples to go back to this prison cell and tell them what they saw and heard:

“the blind receive their sight, and the lame walk, the lepers are cleansed, and the deaf hear, the dead are raised up, and the poor have the gospel preached to them. And blessed is he who shall not be offended in me.”

Jesus knew his mission and John’s doubts did not make him in the least unsure of himself. Furthermore Jesus knew that John would recognize the words and the promises of the Scriptures because they shared a common narrative and common history of the people of God. In using the Scriptures Jesus reminded John that God himself would be the stumbling block to Israel and Judah, but not to those who trusted in him.

“the blind receive their sign, and the lame walk, the lepers are cleansed, and the deaf hear, the dead are raised up, and the poor have the gospel preached to them. And blessed is he who shall not be offended in me.”